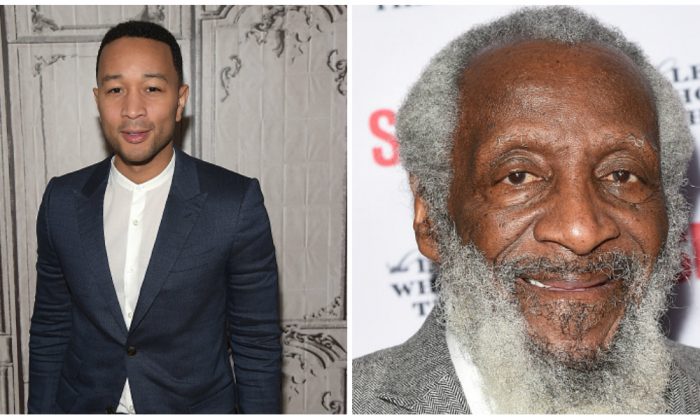 John Legend is honoring Dick Gregory by producing an off-Broadway play titled, “Turn Me Loose,” a production about the comedian’s life.

The jokes of Dick Gregory, born in 1932 in St. Louis, MO, were a representation of the times in the 1960s, when racism was overt. It was in his youth that Gregory found his voice in calling for social justice for all—protesting alongside his Sumner High School classmates for the end of segregation.

This was only the beginning for Gregory. He would later go onto protest against the Vietnam War, stand in solidarity with captured staff members of the U.S. embassy in Iran, and protest in front of the CIA headquarters after allegations emerged that it supplied crack cocaine to predominantly Black neighborhoods during the ’90s.

Joe Morton, the father of Olivia Pope (Kerry Washington) on “Scandal” will star as Gregory.

Legend shares similarities with Gregory, also being an advocate for social justice. In 2015, the Oscar and Grammy-winning musician established the ‘Free America’ initiative, to end mass incarceration.

“We have a serious problem with incarceration in this country,” says Legend in an article on the organization’s website. “It’s destroying families, it’s destroying communities and we’re the most incarcerated country in the world.”

He and his wife,  Chrissy Teigen also paid for food trucks to feed protesters who were outside of Lincoln Square in New York City for several days after the controversial death of Eric Garner in 2014. They’ve also donated to Planned Parenthood after the deadly shooting in Colorado left three dead, including a police officer.

Legend will write an original song for the play.

The official opening for the show is set for May 19 at the Westside Theater. However, fans can watch previews beginning May 3.