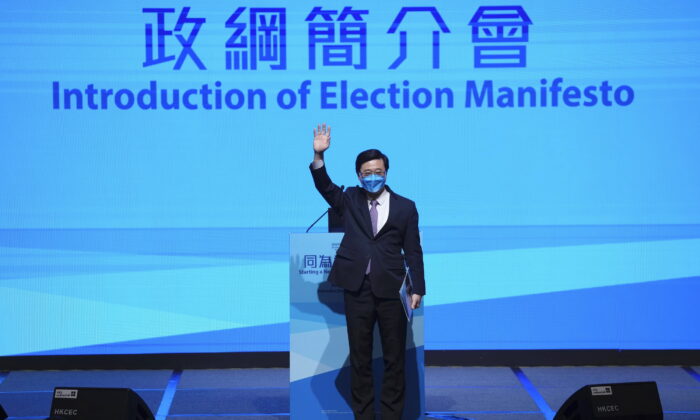 Lee, the sole candidate in the election, garnered 99.16 percent of the delegates’ votes and was declared the sixth Chief Executive of Hong Kong.

On May 30, Lee was awarded a certificate of appointment by Li Keqiang the premier of the Chinese regime.

In the afternoon, the head of the CCP Xi Jinping met with Lee, praising him as “a patriot and a lover of Hong Kong,” who is “firm in his stance, courageous in his role, and active in his work,” while “contributing to the protection of national security,” and is “fully recognized and trusted” by the Central regime.

Xi is expected to attend Lee’s inauguration ceremony on July 1, which also marks the 25th anniversary of Hong Kong’s transfer of sovereignty from the UK.

Lee is Hong Kong’s first police-turned-chief executive. During his tenure as Secretary for Security, police actions and enforcement methods became extreme and controversial, especially during the large-scale 2019 protests against the amendment of the extradition law that would allow authorities to extradite Hong Kong protesters to mainland China.

The protests were dubbed the Anti-Extradition Law Amendment Bill (ELAB) Movement. A number of pro-democracy MPs questioned the administration’s excessive use of police force and indiscriminate arrests at the time.

Responding to a Legislative Council question earlier, Chris Tang Ping-keung, the incumbent Secretary of Security, said that up to February, a total of 10,277 people had been arrested by the police in relation with the Anti-ELAB protests, of which 2,804 were prosecuted and 1,172 convicted.

In an opinion article on Project Syndicate on May 25, Patten said that “in a farcical selection process dressed up as democracy, the Communist Party of China recently installed a former policeman, John Lee, as the new Chief Executive of its puppet regime.”

“Lee is not just any old cop,” Patten said. “He got the job because he supervised the brutal 2019 crackdown on demonstrations in Hong Kong after two million residents protested against the city government’s plan to allow the extradition of criminal suspects to mainland China.”

Patten also remarked on the May 11 arrest of former Hong Kong Bishop Joseph Zen, calling him “one of Asia’s most celebrated and admired clerics,” and three others, just three days after Lee was “elected.” All four were trustees of the 612 Humanitarian Relief Fund, which provided legal and financial assistance to over 2,200 people that were arrested for participating in the 2019 demonstrations.

“Although the fund had already been wound up under police pressure, the 90-year-old cardinal and his colleagues were arrested for allegedly colluding with foreign forces in breach of China’s draconian national security law,” Patten said.

In closing, Patten said, “Even as they focus on Ukraine, liberal democracies must continue to speak out against China’s assault on Hong Kong’s freedom and rule of law.”

Li Xianzhi, a columnist for Hong Kong’s Ming Pao newspaper, said in a May 24 article that, although the Hong Kong administration is still uncertain about whether Xi will come, they are already making preparations for his trip, citing several key members of the Hong Kong establishment with close ties to Beijing.

Hong Kong authorities are considering requiring guests who will have access to Xi to undergo a seven-day isolation period before attending the event, including an option of isolation in Shenzhen. However, this option would make these pro-Beijing people fear being stranded in mainland China for a long time due to the CCP’s tough zero-COVID policy.

Since the beginning of this year, COVID-19 outbreaks in Hong Kong have led to varying degrees of restrictions following orders from the CCP’s Central Committee.

If Xi does make the trip, it will be the first time he has left China since the pandemic.