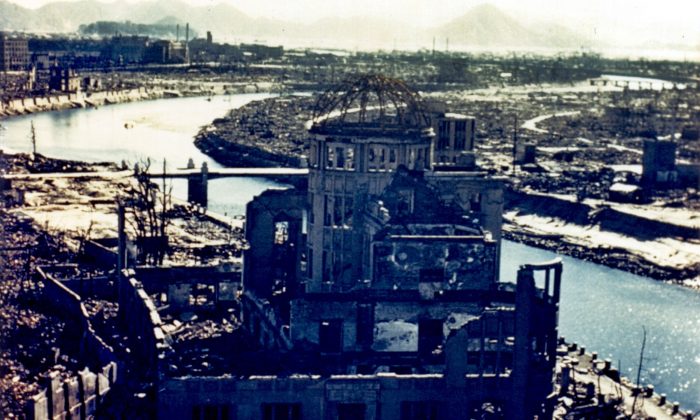 This September 1945 file picture shows the remaining of the Hiroshima Prefectural Industry Promotion Building, known as the Atomic-Bomb Dome, which was later preserved as a monument. (AFP/Getty Images)
US

John Kerry to Visit Hiroshima, First Senior US Official to Do So

U.S. Secretary of State John Kerry is set to visit Hiroshima next week for a memorial to victims of the atomic bombing in 1945.

He will be the highest ranking U.S. official to ever visit the Hiroshima Peace Memorial Park.

A few days after the attack on Hiroshima, the United States released another bomb, this time on Nagasaki.

Mark Toner, a State Department spokesman, said on April 5 that Kerry will be in Japan next week for a meeting of foreign ministers from the G7 leading world economies.

According to Kyodo, a Japanese news agency, foreign ministers from the United States, Britain, and France will be visiting the site for the first time.

The State Department said Kerry and the other G7 foreign ministers will pay their respects to those who died in World War II. They will also emphasize President Obama’s call for a world without nuclear weapons.

Obama called on North Korea to give up its nuclear weapons, and spoke with the leaders of Japan and South Korea to discuss ways of countering a nuclear attack.