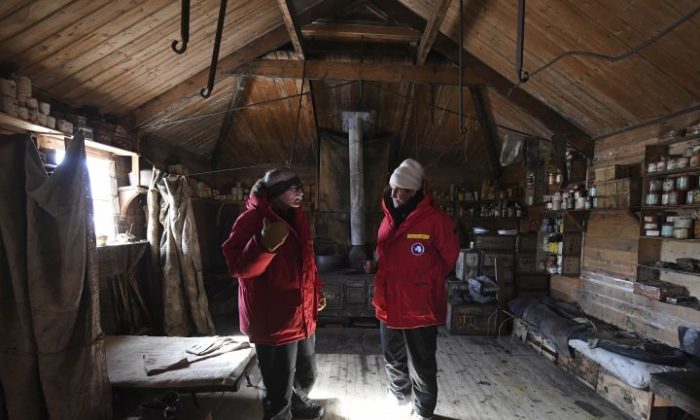 U.S. Secretary of State John Kerry, right, listens to Scott Borg, the head of the Polar Program for the National Science Foundation, as he visits the historic Shackleton hut during Kerry's visit to McMurdo Station in Antarctica Friday, Nov. 11, 2016. Kerry became the highest-ranking American official to visit Antarctica on Friday when he landed for a two-day trip during which he'll hear from scientists about the impact of climate change on the frozen continent. (Mark Ralston/Pool Photo via AP)
Politics

John Kerry Talks Climate Change, but Not Trump, in Antarctica

U.S. Secretary of State John Kerry didn’t comment on President-elect Donald Trump’s election victory on Friday while visiting Antarctica, but did say that citizens who care about limiting emissions might have to march in the streets to push for more aggressive action.

Kerry became the highest-ranking American official to visit Antarctica when he landed for a two-day trip. He’s been hearing from scientists about the impact of climate change on the frozen continent.

Trump has called climate change a hoax and said he would “cancel” U.S. involvement in the landmark Paris Agreement on global warming.

Kerry said there was a risk that much of Antarctica’s ice will eventually flow into the ocean, raising sea levels worldwide.

Despite the Paris agreement to cut the fossil-fuel emissions causing the planet to warm, “we haven’t won the battle yet,” Kerry said to the audience that included many young people involved in climate research.

Earlier, a planned visit to the South Pole was scrapped because of bad weather. Instead, Kerry and members of his entourage were taken on a helicopter tour of the McMurdo Dry Valleys, one of the few parts of Antarctica that are largely free of ice year-round.

Kerry left from New Zealand early Friday aboard a C-17 Globemaster military cargo plane after being held up for about a day by bad weather. An experienced pilot, Kerry spent much of the flight in the cockpit of the huge jet, chatting with the pilots.

After a smooth trip of about five hours, the group landed on the Pegasus Ice Runway, the strip of ice that serves McMurdo.

Kerry’s aides described the trip as a learning opportunity for the secretary of state. He has been receiving briefings from scientists working to understand the effects of climate change on Antarctica.

Kerry has made climate change an intensive focus of American diplomacy during his term, and had previously spent decades working on the issue as a U.S. senator.

He planned to return to New Zealand on Saturday for a meeting with Prime Minister John Key. Kerry plans to fly next week to the Middle East for talks, and then onward to a global climate conference in Morocco, where he will give a major speech.