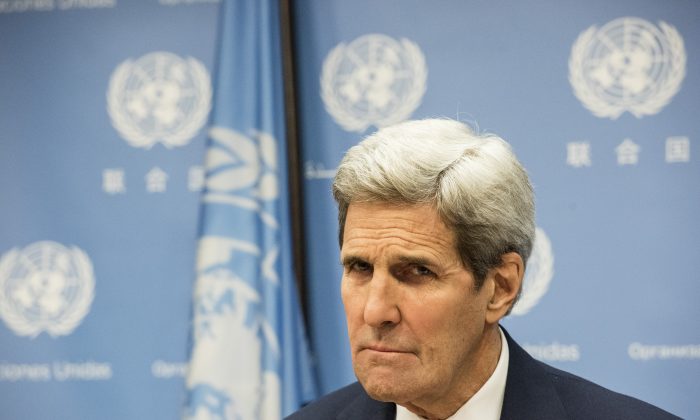 Secretary of State John Kerry at a news conference after a United Nations Security Council meeting on Syria at the United Nations in New York on Dec. 18, 2015. (Andrew Renneisen/Getty Images)
Middle East

BEIRUT—U.S. Secretary of State John Kerry says diplomats meeting in Munich have agreed to work with Syrian parties to implement a “nationwide cessation of hostilities.”

Kerry said early Friday that the target is to implement the cease-fire in a week’s time. He said that would not apply to the Islamic State group and the extremist al-Nusra Front.

Kerry said diplomats from the U.S., Russia and other powers also agreed to “accelerate and expand” the delivery of humanitarian aid immediately, bringing aid to besieged areas.

A working group is to start meeting in Geneva Immediately to oversee that.

Talks aimed at narrowing differences over Syria and keeping afloat diplomacy to end its civil war have gotten under way in Munich.

German Foreign Minister Frank-Walter Steinmeier said everyone’s who is needed to make progress is there.