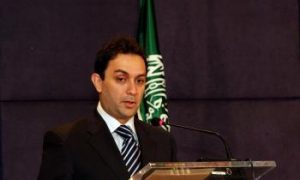 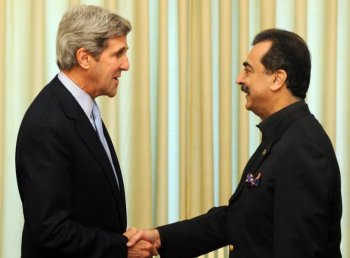 John Kerry (L) shakes hands with Pakistan's Prime Minister Yousuf Raza Gilani prior to a meeting at The Prime Minister House in Islamabad on Feb. 16. (Aamir Qureshi/AFP/Getty Images)
US

Helena Zhu
View profile
Follow
biggersmaller
Print
Sen. John Kerry (D-Mass.), who headed for Pakistan on Feb. 14 to soothe the bitter relationship between Pakistan and the United States, sounded hopeful about the after two days of meetings with senior Pakistani officials.

Kerry, 67, told The Associated Press that he is optimistic that Washington and Islamabad can make progress “in the next few days” toward settling the dispute over the detention of American embassy worker Raymond Davis in Pakistan.

Washington holds that Davis shot two Pakistanis on Jan. 27 only in self-defense as they tried to rob him, and that his detention is illegal under international agreements regarding diplomats.

However, the Pakistani officials are unwilling to appear to have yielded to pressure from Washington, and said that the matter needs to follow the court’s decision.

Davis’ next court hearing is scheduled for Thursday.

"I look forward in the next few days, hopefully, to finding the ways that we all agreed on—that we can find—in order to resolve this issue," Kerry told reporters before boarding a plane in the Pakistani capital, according to AP.

Since Davis was arrested, thousands of Pakistanis have taken to the streets, demanding him to be hanged.

Kerry said in a press release on Tuesday that he had not come to the South Asian country to dictate or “order anybody to do anything,” but only to listen and “find a path forward so that we can all live by the law.”