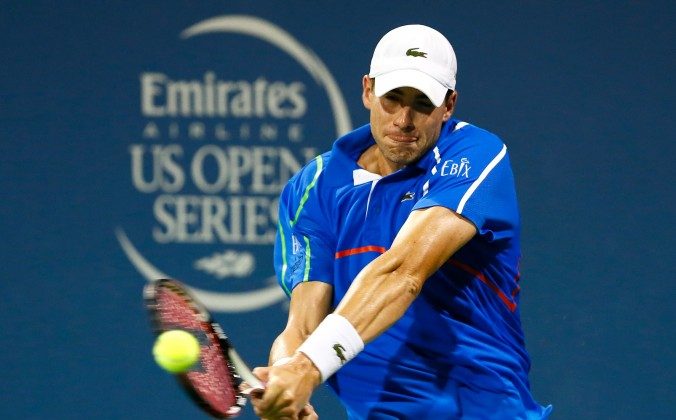 One American will make it to the Atlanta Open final–John Isner or Jack Sock. They play in one of the semifinal matches on Saturday, July 26.

It will be broadcast on ESPN2.

Live streaming will be available via Watch ESPN, ATP, or TennisTV.

Sock, unranked in the tournament, is ranked 72nd in the world. He beat unranked Lukas Lacko of Slovakia in two sets (7-6 (6), 6-2) in the quarterfinals.

Isner and Sock have played four times, starting in 2012 at this same tournament. Isner beat Sock in two sets in the quarterfinals.

Isner also beat Sock in Houston (in a close three-set match) in 2013 and Nice, France earlier this year.

Benjiman Becker of Germany is playing the winner of Dudi Sela and Vasek Pospisil in the other semifinal. Their match was going late into Saturday night.

The final is slated for 5 p.m. on Sunday.

Isner and Sock each rallied from early deficits Friday to set up the all-America semifinal in the Atlanta Open.

Isner was not sharp in beating Matosevic in hot conditions, but took advantage of the Australian’s mistakes. Sock later topped Lacko.

Isner’s service game was off as Matosevic broke the American in the first game of the match, and the former University of Georgia star trailed 2-0 before fighting off break points in his second and third service games to make the semifinals for the fifth straight year.

Both players delayed the pace of play in the second set, with Isner in particular bending over on multiple occasions to rest between points.

The 6-foot-10 fan favorite finished the match with his 17th ace, yet won a modest 70 percent of the points on his serves, well below the ATP Tour-leading 93 percent rate he carried into the quarterfinals.

He also was helped by the timing of Matosevic’s errors.

The Australian sent an overhand smash well long to enable Isner to break serve for a 4-3 lead in the first set, and then Matosevic double-faulted to hand Isner set point in a 10-8 tiebreaker.

Back-to-back double faults by Matosevic led to a service break in the second set for a 4-3 Isnerlead.

Isner is 14-3 in Atlanta, winning the event last year after falling in the 2010 and ’11 finals to Mardy Fish and reaching the 2012 semifinals and losing to eventual champion Andy Roddick.

Lacko led 5-3 in the first set, but Sock worked his way to a tiebreaker, where, after failing to take advantage of two set points on serve, he captured consecutive points on Lacko’s serve for an 8-6 tiebreaker win.

The Nebraska native finished off his career-high 18th win of the season with a lob over the charging Lacko.