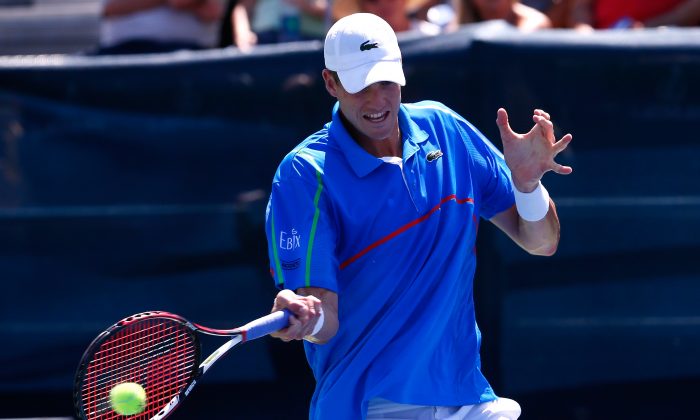 The pair are slated to start play at 4 p.m. EDT.

The match will be broadcast on ESPN 2.

Live streaming will be available via Watch ESPN, TennisTV, or ATP.

Isner of America, the No. 1 seed in the tournament and No. 12 in the world, is in the Atlanta Open final for the fourth time in the tournament’s five-year history. He beat fellow American and practice partner Jack Sock 7-5, 6-4 on Saturday.

Sela of Israel, unranked in the tournament and No. 94 in the world, will be looking to get his first career title after beating Germany’s Ben Becker 6-3, 3-6, 6-3 in a night match.

Isner and Sela have played twice before. Isner beat Sela in 2011 in two sets at Winston-Salem, and again earlier this year at Delray Beach–although it was a close, three-set match.

Isner improved to 15-3 in the event after saving his best for the end of each set. The former University of Georgia star broke Sock’s service twice — each time to capture a set.

“I’ve made four finals here. Winston-Salem is my hometown. This feels like my hometown because I went to school here,” Isner said. “I feel like it’s my time of year to play well, and start picking up the pace a little bit.”

Before the final game of the first set, Isner won only two points against Sock’s first five service games.

Then, in a game that lasted 14 minutes and reached deuce nine times, Isner won 13 points, survived six game points, and took the set when Sock sent a backhand wide. That was Sock’s third backhand of the set. All three were unforced errors.

“I wasn’t putting any pressure on him, but I told myself that might work to my favor (to crank up his energy),” Isner said. “If I could put a little pressure on him, maybe he could crack a little bit and . . . second set, same thing.”

Serving at 4-5 in the second set, Sock—who three weeks ago teamed with Canadian Vasek Pospisil to win the doubles title at Wimbledon—double faulted twice.

When Sock sent his last forehand into the net, Isner moved through to the Atlanta final yet again. He lost in there in 2010 and 2011 to Mardy Fish, and fell in the 2012 semifinals to eventual champion Andy Roddick.

As Isner began timing Sock’s first serves better, Sock took off some pace. That may have worked against him.

“Against John, you don’t have many chances at all. I had a good look at a backhand pass,” Sock said. “I think it was a combination of me missing first serves, and him moving in a few feet closer (to return).

“Usually, when he gets his racket on it, he hits it pretty clean. I started missing first serves, and he’s dangerous on the second.”

Sock is ranked 72nd, but will become the second-highest ranked American when the new rankings come out — moving ahead of Sam Querrey (61) and Steve Johnson (64). Querrey won a first-round match over Johnson in Atlanta before falling in the second round.

When the 5-foot-9 Sela meets the 6-10 Isner, it will be just the second ATP final of his career. He lost to Andy Roddick in Beijing in 2008 in the first.

Sela made a difference by winning 54 percent of his second serves to just 41 percent for Becker. The match clincher came after a 79 mph second serve. Isner often tops 140 mph.

“I feel great,” Sela said. “I came out playing well, and (Becker) began to play better, more aggressively. I was a bit lucky at the beginning of the third set and I was able to finish it out.”