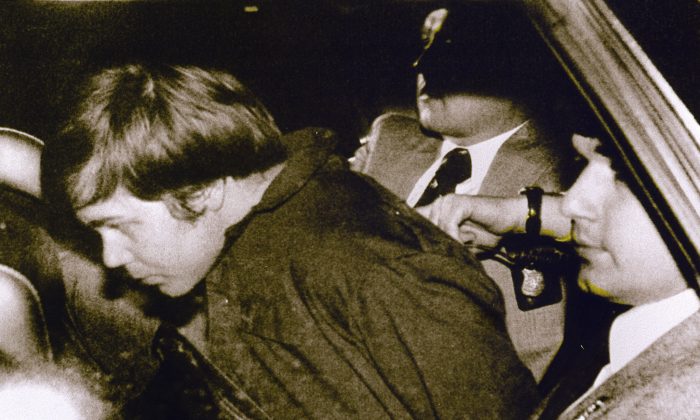 WASHINGTON—The man who tried to assassinate President Ronald Reagan has been released from a Washington mental hospital for good, more than 35 years after the shooting.

A spokeswoman for the District of Columbia’s Department of Mental Health said early Saturday that all patients scheduled to leave St. Elizabeths Hospital had been discharged. John Hinckley Jr. was among those scheduled for discharge.

An Associated Press reporter saw a hired car pull into the driveway of the Hinckley home about 2:30 p.m. Officers from the Kingsmill Police Department chased reporters away.

A federal judge ruled in late July that the 61-year-old Hinckley is not a danger to himself or the public and can live full-time at his mother’s home in Williamsburg.

Hinckley had already been visiting Williamsburg for long stretches at a time and preparing for the full-time transition. He’ll have to follow a lot of rules while in Williamsburg, but his longtime lawyer Barry Levine says he thinks Hinckley will be a “citizen about whom we can all be proud.”

This is what life will look like in Williamsburg for Hinckley:

Hinckley will have to work or volunteer at least three days a week. He hasn’t yet done paid work in Williamsburg, but he has volunteered at a church and a mental health hospital, where he has worked in the library and in food service.

Hinckley’s mother lives in the gated community of Kingsmill. The unassuming home is on the 13th hole of a golf course. Hinckley’s room has a king-size bed and TV and is decorated with paintings he has done of houses and cats, according to court documents. In the past, he has done chores like cleaning, dishwashing, laundry and leaf-raking. After a year, he may live alone or with roommates.

Hinckley will continue to go to therapy while in Williamsburg. For at least the first six months he’ll see his psychiatrist twice a month and he’ll have to attend weekly group therapy sessions. He’ll also see a therapist individually. He’ll return to Washington once a month to St. Elizabeths’ outpatient department to discuss his mental health and compliance with the conditions of his leave.

Hinckley got a driver’s license in 2011. The court order in his case lets him drive within 30 miles of Williamsburg by himself, which gets him to Newport News but not Norfolk. He can go up to 50 miles from the city if accompanied by his mom, sibling or a therapist or social worker. He can also drive to and from Washington once a month for his outpatient meetings.

Hinckley has long considered himself a musician and an artist. He paints and plays the guitar and has been involved in both as part of his therapy. He’ll continue to see a music therapist once a month while in Williamsburg. At court hearings in the case in late 2011 and early 2012, lawyers discussed the fact that Hinckley had recently developed an interest in photography.

There are limits to how Hinckley can spend his leisure time. He also can’t drink or use illegal drugs. He can surf the web but, at least initially, he’s not allowed to search for information about his crimes or victims, among other things. He can’t have accounts on Facebook, Twitter, Instagram, YouTube or LinkedIn without permission.

Hinckley can register to vote in Virginia. He has expressed an interest in voting in the past and tried unsuccessfully to get a ballot in the 1980s and 1990s. Hinckley’s lawyer, Barry Levine, told a newspaper in early August that he thinks his client will register to vote. Virginia’s deadline to register for the November presidential election is Oct. 17.

Don’t expect to see Hinckley giving any interviews. He’s barred from talking to the press.