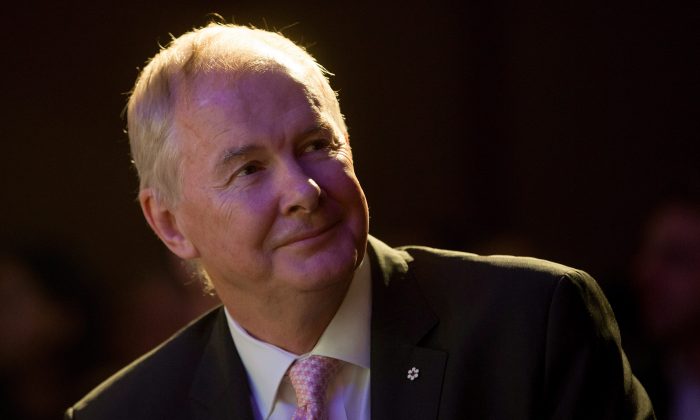 John Furlong, Own The Podium board chairman and former CEO of the Vancouver Olympics, watches a video of the 2010 Olympics moments before addressing a Vancouver Board of Trade luncheon in Vancouver on Nov. 25, 2015. (THE CANADIAN PRESS/Darryl Dyck)
Canada

VANCOUVER—Former Vancouver Olympics CEO John Furlong says he felt like he was being accused of letting Canada down when a newspaper published allegations that he abused First Nations students more than 40 years ago.

The man who steered the 2010 Winter Olympic Games has delivered his first major speech in three years to a packed, welcoming audience at a Board of Trade event in Vancouver.

Furlong says he had many friends before Laura Robinson wrote an article in the Georgia Straight including allegations that he beat and taunted students at a northern B.C. school in 1969 and 1970.

He says that when the article was published in September 2012, his world came crashing down and many of his friends disappeared.

Robinson filed a defamation suit over Furlong’s public comments after the article was published, and last month a B.C. Supreme Court judge ruled he had a right to defend himself from her attacks on his character, conduct, and credibility.

While the judge found numerous errors in Robinson’s reporting, the allegations in the article have not been tested in court because Furlong dropped his own defamation suit earlier this year.