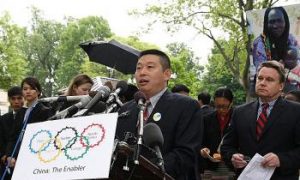 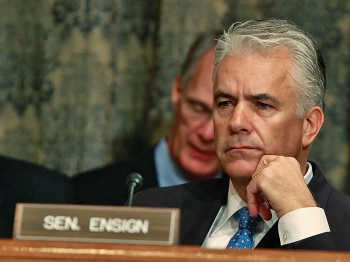 Sen. John Ensign (R-Nev.) announced that he is going to resign next month. (Mark Wilson/Getty Images)
US

Embattled Sen. John Ensign (R-Nev.) said on Thursday he will resign "effective as of May 3," ending his tumultuous Senate career that has been rocked by an ongoing ethics investigation.

"It is with tremendous sadness that I officially hand over the Senate seat that I have held for eleven years," Ensign said in a statement.

Ensign is currently being investigated by the Senate ethics committee over his extramarital relationship with aide Cindy Hampton. Her husband Doug Hampton, also Ensign’s deputy chief of staff, was indicted last month over charges that he allegedly lobbied for an airline company and an energy firm in violation of laws barring conflict of interests.

A former chairman of the Senate Republican Policy Committee, Ensign had announced weeks earlier that he would not be seeking re-election in 2012 due to the ethics inquiry.

Instead, Ensign announced that he would be stepping down and "clos[ing] the door to this chapter of my life" while maintaining that he did not commit any ethics violations.

“While I stand behind my firm belief that I have not violated any law, rule, or standard of conduct of the Senate, and I have fought to prove this publicly, I will not continue to subject my family, my constituents, or the Senate to any further rounds of investigation, depositions, drawn out proceedings, or especially public hearings," Ensign said in a statement. "For my family and me, this continued personal cost is simply too great."

Sources told the Las Vegas Review-Journal that Ensign’s vacated seat would most likely be filled by Congressman Dean Heller, a Republican who had planned on running against Ensign during GOP primaries. Nevada Governor Brian Sandoval has endorsed Sandoval and under federal law, has the authority to appoint a replacement Senator until a special election is called, which must be conducted in 180 days.

Ensign said a final farewell to Nevada citizens in a letter on his Senate website.

"The turbulence of these last few years is greatly surpassed by the incredible privilege that I feel to have been entrusted to serve the people of Nevada," Ensign said. "I can honestly say that being a United States Senator has been the honor of my life."