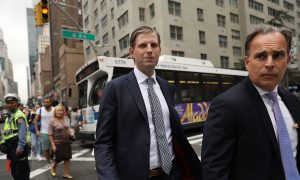 John Eastman is a Constitutional scholar at the Claremont Institute and an Attorney representing President Donald Trump.

He said: “So John Kennedy’s electors also met on their own and cast their votes for John Kennedy. When the results of that litigation were concluded, and it was determined that Kennedy had actually won Hawaii. The governor retroactively certified the Kennedy electors, and those votes are the ones that were opened in Congress at the joint session of Congress in the beginning of January.”