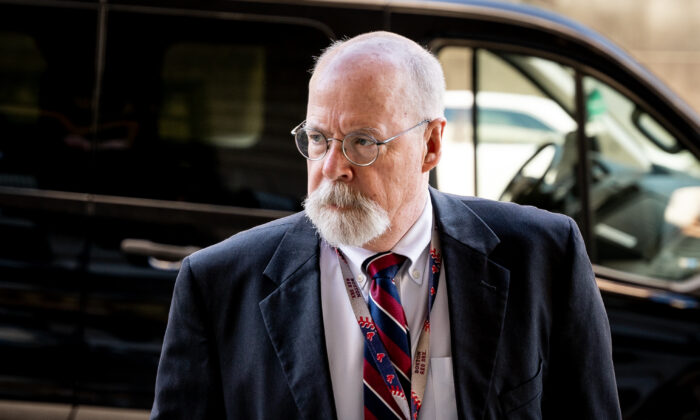 Special counsel John Durham arrives at federal court in Washington on May 18, 2022. (Teng Chen for The Epoch Times)
Politics

Special counsel John Durham’s team spent more than $1.6 million in the months leading up to the trial of former Hillary Clinton campaign lawyer Michael Sussmann, according to a new spending report.

Almost half of the expenditures stemmed from paying personnel, with the biggest chunk of that tranche going to Department of Justice employees who are detailed to Durham’s team.

Another 18 percent was for the travel and transportation of people on the team, supplies, or rent, communications, and utilities.

The rest went toward paying contractors, either for litigative support or information technology services.

The money Durham’s team spent is approximately 12 percent less than their expenditures for the prior reporting period, which was from April 1, 2021, to Sept. 30, 2021. Personnel costs were lower in the previous period, but the amounts paid for contractual services, travel, and rent were much higher.

Durham was appointed by then-Attorney General William Barr, a Trump appointee, to serve as special counsel on Oct. 19, 2020. Barr tasked Durham with investigating the origins of the counterintelligence probe against Trump over alleged links to Russia.

Durham has so far brought three cases. The first, against FBI lawyer Kevin Clinesmith, led to a guilty plea. Clinesmith admitted to manipulating an email from the CIA that had originally stated that Carter Page, a former Trump campaign associate, was a CIA asset. Clinesmith changed the message to say Page wasn’t an asset. Clinesmith received probation and no jail time in 2021.

The second case, against Sussmann, ended with the lawyer being acquitted on May 31. Sussmann was charged with lying to the FBI by telling a bureau lawyer that he was bringing Trump–Russia claims on his own accord. He was working at the time for Rodney Joffe, a technology executive who was promised a position in a Clinton administration, and the Clinton campaign.

The third case is set to go on trial later this year in Virginia. Igor Danchenko, a primary source for ex-British spy Christopher Steele’s anti-Trump dossier, is accused of lying to U.S. authorities on multiple occasions about his contacts with Charles Dolan, a longtime Clinton associate.

“In truth and fact, and as DANCHENKO well knew, DANCHENKO sourced one or more specific allegations in the [dossier]” from Dolan, according to the indictment. Danchenko is also said to have lied when he said he was told by Sergei Millian, a Russian American businessman, about a “conspiracy of cooperation” between Trump’s campaign and Russian officials. In fact, Danchenko “fabricated these facts,” the charging documents state.