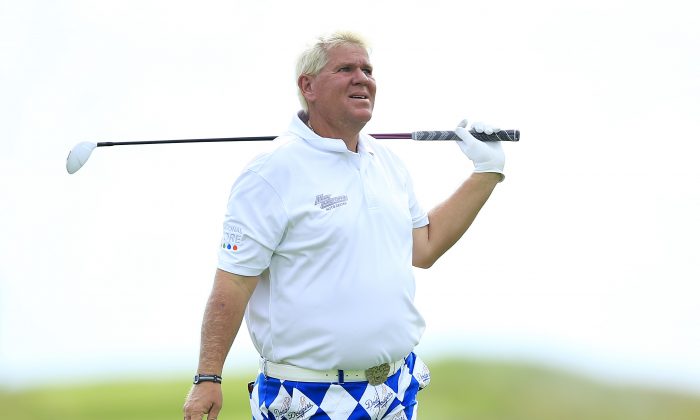 John Daly watches a shot on the 18th hole during the first round of the 2015 PGA Championship at Whistling Straits on August 13, 2015 in Sheboygan, Wisconsin. (David Cannon/Getty Images)
Golf

New York, NY—John Daly’s start with the Champions Tour this week at the Insperity Invitational in Houston marks a clear beginning for a man who has gone through the full gamut of ups and downs—compiling them would require no less than an accountant to itemize all of the various incidents. In turning 50 Daly now has a second lease on life in professional golf—one that frankly, given his immense talent, was squandered through an array of behaviors that go beyond the bizarre.

One of the virtues of The Champions Tour is that it has provides another opportunity for golfers to demonstrate they can still play. In golf terms, getting a second swing is called a “mulligan” and clearly John Daly is looking to reverse a course that sadly should have been far greater than the two major championships and the three other PGA Tour victories he earned.

No less than Daly himself admitted this week that given his talents he should have done far more than what he did do. Coming into public view when he secured entry into the ’91 PGA Championship at Crooked Stick just outside of Indianapolis as the 9th alternate, Daly jettisoned himself from “zero to hero” in winning one of golf’s most prestigious titles in just his third performance in a major event. Daly mesmerized the gallery and a global television audience with prodigious drives—hence the tagline “Long John Daly” and coupled that with a gifted putting touch. In a matter of a week’s time Daly’s exploits were the talk of not just the golf community, but throughout the sports world.

Four years later, Daly would win at golf’s most hallowed grounds—The Old Course at St. Andrews. Showing a keen sense in maneuvering himself around the storied layout during brutal wind conditions in the final round Daly looked to be a winner after 72 holes until Italian Constantino Rocca made a miraculous 60-foot birdie putt through the Vallley of Sin at the 18th hole to tie Daly. For many players such a situation might have melted their resolve—not Daly’s. The playoff was quickly a foregone conclusion and in short order Long John had joined the “who’s who” in golf that have hoisted The Claret Trophy at The Open Championship.

After the 2nd major win it looked like Daly could become the next big time superstar in golf—unfortunately, not long thereafter the steady headlines about John Daly had more to do with busted up hotels rooms, failed marriages and a behavior pattern that had no boundaries. Inexplicably, even after winning The Open Championship, Daly was left off the American Ryder Cup team that year by Captain Lanny Wadkins who ultimately decided to go with fellow Wake Forest alum Curtis Strange. Neither Strange nor the American squad would do well at Oak Hill in losing for just the second time on American soil. For those who are trivia geeks, who is the only golfer to have won two major events and never been on a Ryder Cup Team? Answer—John Daly.

What made Daly special to many golf fans was much more than his innate talent. The Dardenelle, Ark native displayed a country boy mentality — self-effacing and always eager to sign autographs and tend to those in need. Amazingly, what many people fail to remember is that after winning the PGA Championship, Daly gifted $30,000 of the first prize to the family of a man who tragically had been killed by a lightning strike at the course. The money was set aside for a college fund for the man’s two daughters.

Those within golf respected his tremendous golf skills. Jack Nicklaus was quick to tell Daly to contact him at anytime if would like to chat about anything. Daly never made the call—despite being a big time fane of the Golden Bear.

Even with all the abrupt course walk-offs, the thrown clubs and the off-on again embrace of alcohol Daly still resonated with golf fans because he was quick to admit his faults and state that his own worst enemy was himself. Daly did not have the advantage of a stable family—his father was an alcoholic and abusive dad. But like all sports, time waits for no man. Daly did make a return to stardom in 2004 winning the PGA Comeback of the Year Award. The following year Daly competed head-to-head against Tiger Woods in the WGC-American Express Championship at Harding Park in San Francisco. Many golf fans had longed to see the talents of these two golfers go head-to-head and the quality of the golf was clearly evident. Daly, unlike so many of the top tier players that Woods had routinely beaten, was not intimidated by the aura of Woods. The two players tied for the lead after regulation and it appeared Daly had the advantage in not only out-driving Woods on the second playoff hole—the 18th—by 15 yards and then hitting his approach closer to the hole, to just 15 feet away. Woods barely missed a 30-foot birdie putt and now Daly was left with a moment that in so many ways capsulated his career. Showing no fear John missed with a bold effort—leaving about 3 feet away to continue the playoff. What should have been a routine par-putt was anything but. Daly missed and Woods escaped with another victory. At that point, the golf roads took one man one place—the other in another direction.

The end in San Francisco showed the caliber of golf Daly could muster, provided he showed a determination and dedication to the game. The inner demons of alcoholism and gambling were an insurmountable detour away from what could have been a golf career of serious stature.

In turning 50 Daly has one last opportunity to demonstrate his talents. The issue is a simple one: can a man who has led a life with little internal discipline finally capture his stride? In 1991, when John Daly entered the public scene in such a riveting way, he showed flashes of an Arnold Palmer and Greg Norman swagger. Daly was never going to be the prototypical smooth talking professional golfer hawking various products on television. He was, and remains, somewhat rough around the edges but within a personality that displays a tender quality golf fans have always found endearing.

Golf has produced an array of many characters over the years but in recent times the mold for players has been a steady rollout of homogeneous forms. The faces, swings and manners nearly walk in lockstep. Daly was a clear break from the norm. At his peak—which was fleeting—Daly provided scintillating golf. Although he never ranked higher than 23rd in the world ranking and only had 32 top-ten finishes in 20 plus years of competition, the possibility is still present for Daly to deliver on what he can do when playing well.

John Daly has had plenty of opportunities—the mulligan he has this time will be a way for him to write a final chapter that highlights what he can do on a golf course. It’s up to him now because you only get one mulligan per round—per lifetime.