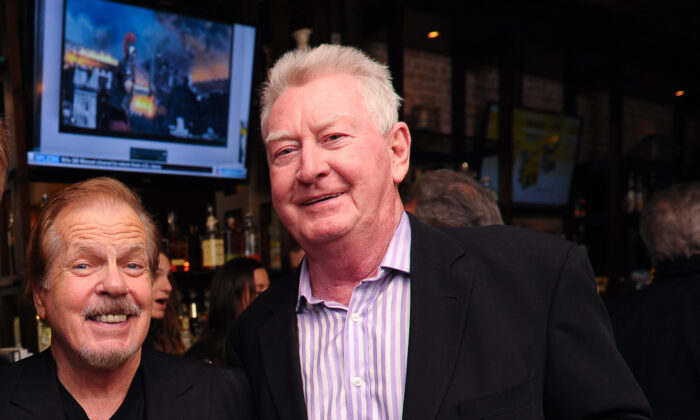 Authors Mike Walker and John Connolly at the "Out For Blood" book launch event at Ivy Bar And Grill in New York City on Nov. 4, 2013. (Rommel Demano/Getty Images)
US News

The well-known journalist’s partner, music insider, and author Dorothy Carvello, confirmed Connolly’s passing in a statement to the New York Post. She said her long-time partner died after a short illness.

Connolly’s first stint in the media industry was as an investigative reporter at Vanity Fair, according to the U.S. Sun. He then spent a decade with Time magazine, from 1995 to 2005, and worked at entertainment news outlet Radar Online for six years, from 2001 to 2007, according to his LinkedIn profile.

He also contributed to outlets including Spy, Premiere, and the Daily Beast, according to The Post.

During his time as a journalist, he notably wrote articles on former President Donald Trump, Steven Seagal, Michael Jackson, and Arnold Schwarzenegger.

The four-part documentary, “Filthy Rich,” aired on May 27, 2020, and features interviews with women who say they were abused by Epstein, including Virginia Giuffre and Maria Farmer. It also features several of Epstein’s former workers.

Patterson told Rolling Stone that while the documentary was in production, he received letters from Epstein’s attorney every week. Its production began nine months before Epstein’s arrest.

“I knew I was going to be careful. I knew I wasn’t going to put anything in the book that I really couldn’t prove was accurate, so I wasn’t really that afraid. Hollywood is a little slower, and I think maybe there was more concern, a little bit of a fear, until Epstein died, and then I think people stopped being afraid of him,” he said.

Patterson said his book with Connolly and Malloy tells the story of “justice breaking down.”

“The justice system breaking down and about how could we, since 2006, not pay attention to this story,” Patterson said CBSN’s “Red & Blue” in July 2019.

He had been working on another book prior to his death, titled “The Sin Eater” based on disgraced and convicted former private investigator Anthony Pellicano, 77.

Prior to becoming a journalist, Connolly worked as a detective at the New York Police Department and as a stockbroker.

Carvello told The Post that a memorial service for Connolly has been planned for the spring.