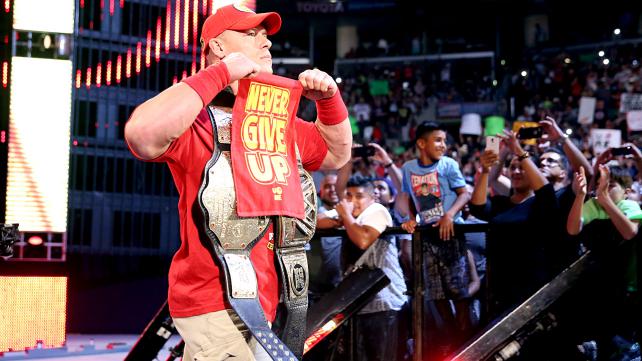 John Cena will try to reclaim the WWE World Heavyweight Championship at the Night of the Champions.

Brock Lesnar took it away from Cena in dominant fashion at SummerSlam, prompting the new titleholder to talk some trash afterward.

“I came, I saw, I conquered, I kicked your [expletive],” Lesnar told TMZ, addressing Cena.

“Go home, lick your wounds, and I dare you, I double dog dare your [expletive], to come back, looking for another [expletive].”

While Roman Reigns and The Rock were among rumored challengers to Lesnar, it seems Cena will get the first shot, WWE CEO Triple H said on Tuesday.

“The decision, announced by WWE COO Triple H exclusively on WWE Network during WWE Main Event, shocked the WWE Universe, still reeling after witnessing the pummeling Cena took from The Beast Incarnate at SummerSlam,” the league said in the announcement.

“The sadistic grin that spread across Lesnar’s usually stoic face – growing wider with every punch that connected with Cena’s head and body – is burned into the minds of fans around the world. The thought of Cena demanding another showdown with the vicious, seemingly unstoppable Lesnar may leave those who watched SummerSlam feeling more than a little uneasy.”

Lesnar was presented with a new, upgraded title at Raw on August 18.

While Lesnar did dominate Cena at SummerSlam, Cena is one of the top contenders to take back the Heavyweight Championship.

If Cena does lose at Night of the Champions, which is scheduled for September 21 at Bridgestone Arena in Nashville, then the league would then decide who Lesnar should face next.