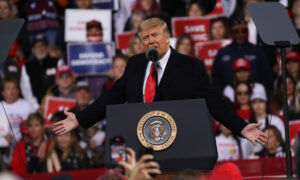 “He’s duly elected and they’ve been after him for five years, and that’s been a coup, attempted coup. And we the people will not tolerate [it], we will not stand for it. We just won’t. That’s why we are here,” Adam told NTD.

“This is cheating. By cheating and fraud, that is an attempted coup d’état of a duly elected President of the United States that we voted,” Adam said.

Adam said the Supreme Court’s decision the day before didn’t surprise him even though he’s a little disappointed.

“They don’t want to get involved in the hornet’s nest of making a decision on who’s going to be the president of the country for four more years,” Adam added. “There [are] other avenues. But the main avenue is the fraud that’s been exposed.”

“I’m very proud of our country and I love it. That’s why I’m here along with tens of thousands, probably it’ll end up being over a million here by the day’s end,” he concluded.