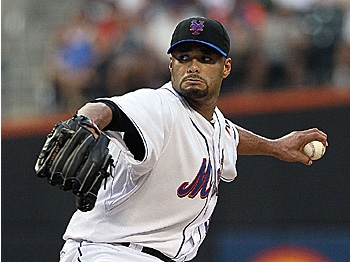 Santana (10–6) went it alone at Citi Field, delivering 115 pitches for the complete game with 10 strikeouts.

“Right before the game, I told Jerry I was ready for 10 innings,” Santana said after the game. “So that was my mindset.”

The Rockies got only four hits off the lefty for the night, and all of them were singles. The closest Colorado got to scoring was with two singles in the second inning that put runners on first and second.

Santana’s impressive solo performance came at a good time for the Mets, who were without closer Francisco Rodriguez. Rodriguez was arrested on assault charges against his girlfriend’s father after Wednesday’s 6–2 loss.

The Mets’ four runs came in the first and seventh innings. In the first inning, shortstop Jose Reyes got on base with a ground ball, and then stole second.

A single by Angel Pagan then sent the speedy Reyes in for the first run of the game. Then a ground-rule double by Ike Davis to put Pagan on third.

Next up was Carlos Beltran, who has struggled to get his hitting back up after his return from injury last month. The slugger hit a sacrifice fly to left field to bring Pagan in for the second and last run of the inning.

Then in the seventh, Santana hit a line drive single to center field to put Ruben Tejada on second, who had been walked previously by Rockies starter Jason Hammel (8–7).

Reyes delivered again with a single to send Tejada in for the third run of the night, and a sacrifice fly by Fernando Martinez brought Santana home for the fourth run with two outs.

Reyes eventually made it to third with his 23rd steal of the season, but remained stranded with Pagan grounding out.

The Mets now square off against the Philadelphia Phillies (63–50) at home in a three-game series that starts Friday. They lost the last series against the Phillies 2–1 last weekend, and hover at the .500 mark with just under two months to go in the season.