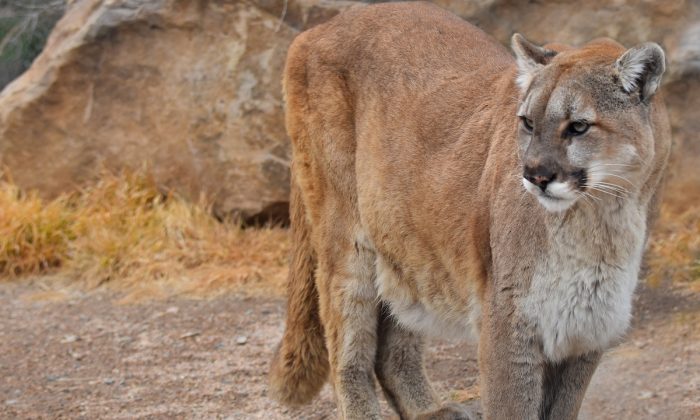 Jogger Choked Mountain Lion That Attacked Him on Colorado Trail

The mountain lion that was killed by a Colorado jogger in self-defense was choked to death, said officials. The cat was later eaten by other animals, making it challenging for officials to conduct a necropsy—an animal autopsy—to identify the animal’s gender and weight.

Ty Petersburg, Colorado Parks and Wildlife (CPW) terrestrial biologist, said when park officials arrived on the scene where the attack occurred, about two hours after officers received the call a man was being attacked, the juvenile lion’s organs were already devoured by other animals, reported the Coloradoan.

These attacks are not common in Colorado.

Here’s what to do if you encounter a mountain lion: pic.twitter.com/xPYfJ2Bb0w

Petersburg added that since the young mountain lion, which was less than a year old, was not fully developed, it was even more difficult to determine the gender of the animal. The mountain lion was also estimated to be less than 100 pounds.

In addition, the park official said the necropsy had ruled out the animal having rabies and will be released at a later date, according to the news station.

The jogger, who has not been identified, was hospitalized after the incident in the foothills of Horsetooth Mountain on  Feb. 4, with what the CPW described as “serious, but nonlife-threatening injuries.”

According to CPW, the man told officials that he heard something behind him on the train before he was attacked by a mountain lion upon turning around to investigate. The animal lunged at the man, biting his face and wrist.

The man was able to fight and break free from the animal before picking up a rock and hitting the lion on the head. He then jumped on the animal and choked it with his hands, arms, and feet, reported Fox News, citing a CPW spokesperson.

Horsetooth Mountain Open Space was temporarily closed as a precaution after the attack, according to a Larimer County statement.

Petersburg said that the jogger put up a huge fight and was lucky to survive the attack, where he sustained serious injuries to his face and lacerations on his body.

“It doesn’t matter the size of the animal because when they have their teeth sunk into you and it’s a life-or-death situation, you will fight for all you’re worth, and he did that,’’ Petersburg told the Coloradoan. “Anybody who saw an animal like that come at your face would be terrified.’’

Moreover, the park official said they were not able to determine what type of animal had eaten the lion but it could have been eaten by other mountain lions.

“We don’t know for sure what ate it, but mountain lions are known to be cannibalistic,’” Petersburg said. “At least it’s a possibility but can’t confirm it.’”

He previously said in a statement that mountain lion attacks are uncommon in Colorado, and he was not sure why the lion decided to attack the jogger.

“From my field experiences, usually we see young cats learning to hunt as causing the main problems, and that could have been the case here,” Petersburg said, reported the news station.

“They don’t know how to kill very well and aren’t big enough for normal prey animals, and they are a little dumber,” he added.

According to the CPW, there have been fewer than 20 deaths in North American in more than 100 years as a result of a mountain lion attack. In Colorado, there has only been 16 injuries and three fatalities since 1990.

The department said the mountain lion population is doing well in the state, but they tend to avoid humans and are rarely seen by people.

The Mountain Lion Foundation (MLF) believes the mountain lion population in the United States is unlikely to exceed 30,000.

The CPW has published a number of tips to teach joggers and hikers on what to do when encountering a mountain lion.

– Do not approach a lion, especially one that is feeding or with kittens. Most mountain lions will try to avoid confrontation. Give them a way to escape.

– Stay calm when you come upon a lion. Talk calmly and firmly to it. Move slowly and never turn your back on it.

– Stop or back away slowly, if you can do it safely. Running may stimulate a lion’s instinct to chase and attack. Face the lion and stand upright.

– Do all you can to appear larger. Raise your arms. Open your jacket if you’re wearing one. If you have small children with you, protect them by picking them up so they won’t panic and run.

– If the lion behaves aggressively, throw stones, branches or whatever you can get your hands on without crouching down or turning your back. Wave your arms slowly and speak firmly. What you want to do is convince the lion you are not prey and that you may in fact be a danger to the lion.

– Fight back if a lion attacks you. Lions have been driven away by prey that fights back. People have fought back with rocks, sticks, caps or jackets, garden tools, and their bare hands successfully. We recommend targeting the eyes and nose as these are sensitive areas. Remain standing or try to get back up!