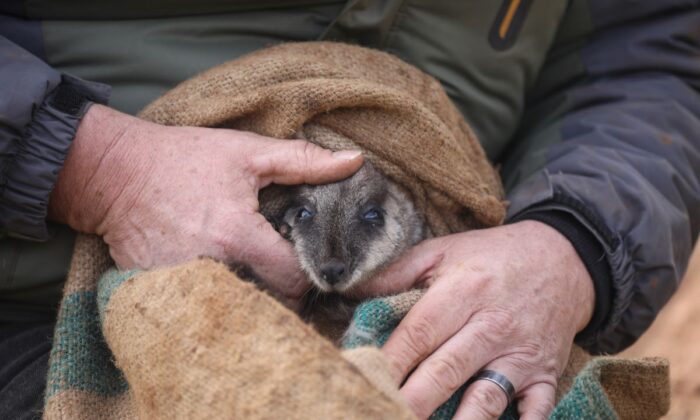 A supplied image obtained on Tuesday, September 13, 2022, of an endangered Brush-tailed Rock-wallaby born after a paused pregnancy. (AAP Image/Supplied by Aussie Ark)
Australia

Rangers at a Australian conservation sanctuary in the state of New South Wales have been shocked by what appears to be a natural miracle with the appearance of a brush-tailed rock wallaby after its mother decided to hit the pause button on her pregnancy.

The joey, the rangers believe, was conceived in October at the Aussie Ark’s wildlife sanctuary in the Barrington Tops, but the sanctuary’s curator Kelly Davis says its mother apparently halted her pregnancy for five months.

“And then a few months later picked up right where she left off. That was so incredible,” Davis told AAP on Tuesday.

The process is called embryonic diapause and essentially is when the development of the embryo is suspended to ensure the survival of the baby.

The Aussie Ark’s rangers believe the mother underwent the evolutionary strategy to finish rearing a joey she already had in her pouch.

“It’s really quite spectacular what nature can do,” Davis said.

The tiny wallaby is thought to now be around the four-month development mark.

Curators were shocked when they noticed the distinguishable bulge of a joey in the female, knowing the only opportunity she had to mate was last year.

“It is the first time I have witnessed first-hand this incredible process,” Davis said.

“It really shows the incredible tenacity and survival instincts of wild animals.”

Aussie Ark established the first breeding program for the species in 2018 and doubled its capacity after the 2019-20 bushfire season, which annihilated much of the wallabies’ habitat.

The population of wild brush-tailed rock wallabies is in decline due to habitat loss and recent environmental catastrophes like the 2020 Australian Bushfires—with fewer than 20,000 left in the wild.