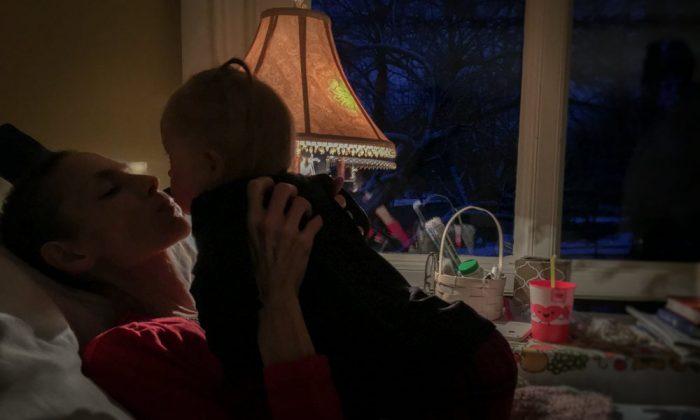 (This Life I Live)
Entertainment

Singer Joey Feek of Joey + Rory fame has only a few more days to live “at the most,” Rory Feek said in an update on Monday night.

Rory wrote that his 40-year-old wife has been “asleep for days now and her body is shutting down quickly,” according to his blog This Life I Live.

I have no regrets… I can honestly say, that I have done everything I wanted to do and lived the life I always wanted to live.
— Joey Feek

The singer’s hospice nurse estimated she has a few days to live.

Before she went to sleep, Joey took her 2-year-old daughter into her arms, saying: “You be a big girl for your papa… and… mama will be watching over you.”

She kissed her child (as seen in the top photo). “One last kiss,” her husband wrote.

Joey said Rory has no regrets in life.

He said, “One of the last things Joey said before she drifted into the deep sleep she’s been in for a few days now is, ‘I have no regrets… I can honestly say, that I have done everything I wanted to do and lived the life I always wanted to live.'”

The couple celebrated the second birthday of their daughter last month.

“A few more days… In the 40 short years that Joey has lived, my bride has accomplished many great things… she’s lived a very full life. But even more than that, she has loved those around her greatly and been loved greatly in return. I can honestly say that Joey’s isn’t just a life well-lived, it’s a life well-loved,” he said.

“Over the last number of weeks her pain had gotten worse and her health had continued to decline rapidly. And not long after Indy’s birthday my wife decided that ‘enough is enough,'” Rory added. “She was ready to stop fighting and she told me so. She said the flowers would soon be blooming back in Tennessee. It’s time to go home.”