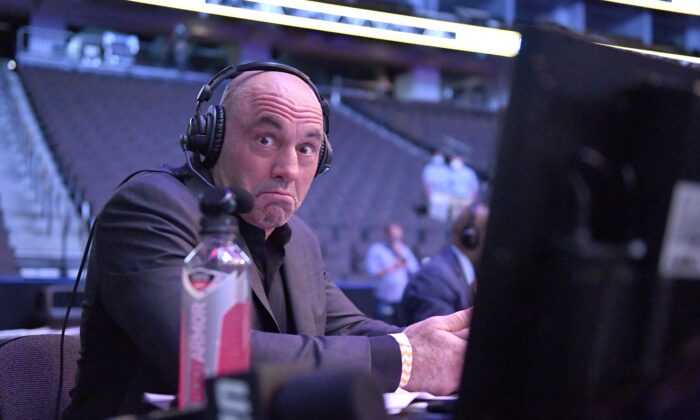 Rogan announced the cancellation during the Dec. 24 episode of his podcast “The Joe Rogan Experience,” with guest Tim Dillon.

“I should probably say this because I haven’t yet. My 4/20 show that’s sold out in Vancouver, I don’t think that that’s happening,” he said.

Rogan, who was originally scheduled to perform at Rogers Arena on April 20, 2022, said it’s unlikely Canada will allow him entry since he hasn’t had any COVID-19 shots.

“I don’t think I can even get into the country. I’m not vaccinated,” he said.

Ticketmaster has since officially announced the cancellation of Rogan’s show on its site.

“No action is required to obtain a refund. It will be processed to the original method of payment used at time of purchase,” it said.

As of Dec. 22, all indoor events such as concerts, sport, or movies can only operate at 50 percent capacity. The province requires all attendees to wear masks and show proof of vaccination to gain entry. The provincial COVID restrictions are expected to end on Jan. 18, 2022.

The 54-year-old Rogan said his body has developed the necessary antibodies to fight off reinfection after having recovered from the virus.

“I’m not gonna get vaccinated. I have antibodies. It doesn’t make any sense,” he said on his podcast Wednesday.

Rogan tested positive for COVID-19 in late August, and announced it in a video post on Instagram in early September.

In the short video, he said that after being diagnosed he “immediately threw the kitchen sink at it,” including taking monoclonal antibodies, ivermectin, a Z-pack, prednisone, a NAD drip, and a vitamin drip.

He said he felt great by the third day after taking the series of treatments.

Ivermectin is an anti-parasitic drug used. While some have claimed the medication shows positive results in preventing COVID-19 or as an early treatment, the U.S. Centers for Disease Control and Prevention says it is “not authorized or approved by FDA [Food and Drug Administration] for prevention or treatment of COVID-19.”