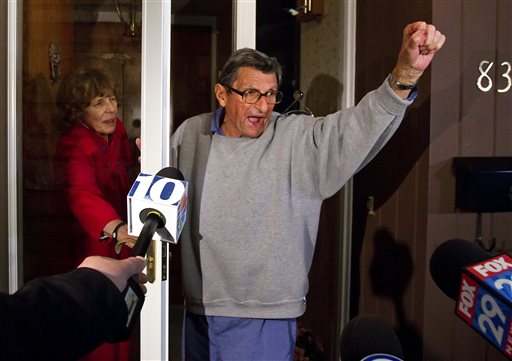 This Nov. 9, 2011 file photo shows Penn State coach Joe Paterno and his wife Sue on the front porch of their house, addressing students. Sue Paterno says she and her husband were ignorant about sexual predators like Jerry Sandusky. (AP Photo/The Patriot-News, Joe Hermitt)
US

Joe Paterno’s Widow: ‘In many cases, we unknowingly helped’ Sandusky

Joe Paterno’s widow: Sue Paterno said Wednesday that she and her husband were ignorant about sexual predators like Jerry Sandusky and did not realize that the former Penn State assistant football coach was abusing the boys he met through a children’s charity that he founded.

“We have been unaware of how a predator behaves,” Sue Paterno said at a program celebrating Child Abuse Awareness Month in Pennsylvania. “In many cases, we unknowingly helped him ‘groom’ his victims while we thought we were helping a child achieve self-esteem and find a better life.”

Mr. Paterno was a famous coach at Penn State, coaching for 46 years until his death in Jan. 2012.

Sandusky was an assistant coach at Penn State, who was convicted of sexually abusing boys over a 15-year span and sentenced to 30 to 60 years in jail.

Paterno was fired after Sandusky was charged. The family has maintained Paterno didn’t know about the crimes.

An internal probe led by former FBI director Louis Freeh and completed in July accused Joe Paterno and three former Penn State administrators of covering up an abuse allegation about Sandusky more than a decade ago in an attempt to shield the university from bad publicity.

Later, another report commissioned by the family said Paterno was a victim of a “rush to injustice.”

A documentary, made by John Zeigler, called “Framing Paterno, hopes to also help prove that Paterno was innocent.

About a month ago, parts of Ziegler’s interview with Sandusky for the documentary were aired on NBC, prompting concern that a public platform was given to a pedophile.

David Zirin, sports editor for The Nation, said on the Current’s “Viewpoint”: “It’s hard not to have the queasy feeling that in his [Sandusky’s] own mind, he is torturing them from his jail cell just by doing this interview and getting it out there.”

Sandusky refused to speak at his trail. The Paterno family released a statement saying that refusal made the interview “transparently self-serving and “yet another insult to the victims and anyone who cares about the truth in this tragic story.”
“Any attempt to use this recording as a defense of Joe Paterno is misguided and inappropriate,” the family said.

On Tuesday the supervising judge of the grand jury, whose findings resulted in the charges against top university officials also charged with knowledge of Sandusky’s actions, rejected their pre-trial motions, allowing their criminal cases to move forward.