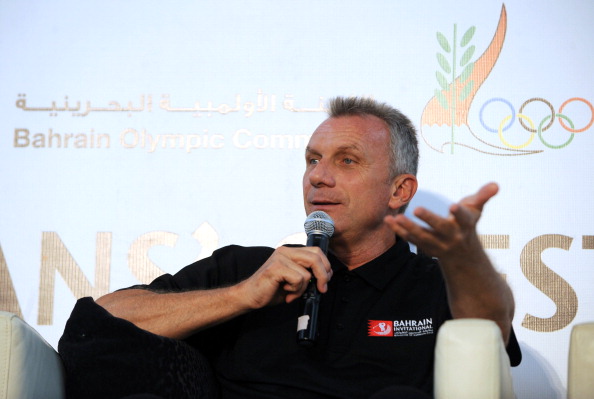 Regarding whether the New England Patriots quarterback deflated footballs during the AFC Championship against the Indianapolis Colts two weeks ago, Montana said, “I mean, it’s easy to figure out who did it,”

The San Francisco 49ers legend added: “I mean, did Tom do it? No, but Tom likes the balls that way, obviously, or you wouldn’t have 11 of them that way without him complaining because as a quarterback, you know how you like the balls. If it doesn’t feel like that, something’s wrong,” according to the Detroit Free Press.

It’s worth noting that Brady considers Montana his personal idol. Recently, Brady–a San Mateo, Calif. native–posted an Instagram photo of him when he was kid wearing a Montana jersey. Brady also said he was in the stands when Montana partook in “The Catch” to win the 1982 NFC championship.

Montana delivered the comments to a small group of reporters during a small Super Bowl XLIX press gaggle in Phoenix.

Both Brady and Patriots coach Bill Belichick have denied their involvement in the controversy.

“The quarterbacks don’t touch the footballs,” Montana noted. “If I ever want a ball a certain way, I don’t do it myself. So somebody did it for him. But it’s not that – I don’t know why everybody’s making a big deal of it trying to figure out who did it. It’s pretty simple. If it was done, it was done for a reason and there’s only one guy that does it. Nobody else cares what the ball feels like.”

According to the Boston Globe, Montana said the whole controversy is “stupid.”

He said, “It’s a stupid thing to even be talking about because they shouldn’t have the rule anyway. If you want to see the game played at the best, everybody has a different grip, everybody likes a different feel.”

“The guy is a great quarterback. There is a category that people like to say, ‘the greatest to ever play,’ he is definitely in that category. But I think it’s hard to put anybody up there, no matter who it might be.

“Go back and watch Otto Graham and Sammy Baugh. If you haven’t see any footage, it’s ridiculous the things those guys did back then. I think it’s really hard to compare, but Tom obviously is having a tremendous career.” …

“Can [Brady’s legacy] get any better? The guy is already playing at the top of the level of anybody else.

“I think a win is great for him, but I think if he loses, I don’t think it matters to his legacy at all. The guy has won three and been here six times.”