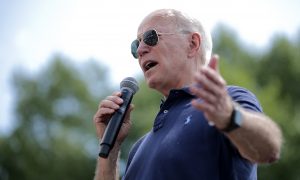 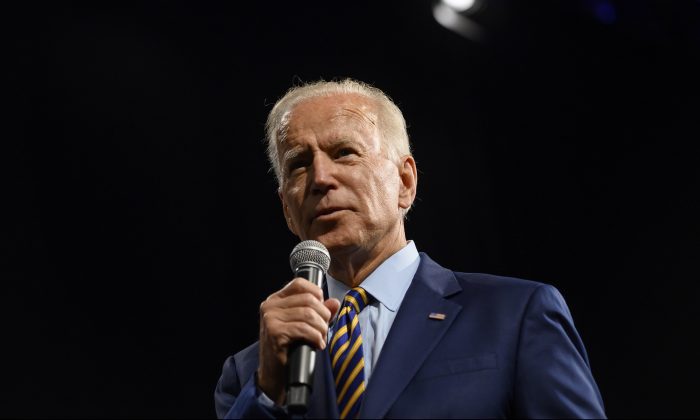 Joe Biden, in Latest Flub, Claims He Was Vice President in 2018

Former Vice President Joe Biden misspoke, claiming he was vice president in 2018, in the fourth such gaff this week, while speaking to reporters over the weekend.

“Those kids in Parkland came up to see me when I was vice president,” Biden told reporters in Iowa on Aug. 10, according to Bloomberg. The teenagers wanted to talk to members of Congress but lawmakers were “basically cowering, not wanting to see them. They did not want to face it on camera.”

Biden’s comment to reporters came after he made the same claim earlier in the day at a gun control forum in Des Moines sponsored by Everytown for Gun Safety and Moms Demand Action. At the forum, Biden said: “I met with them and then they went off up on the Hill when I was vice president.”

Joe Biden thinks he was still in the Obama White House as Vice President in 2018:

“I watched what happened when the kids from Parkland marched … when I was Vice President” pic.twitter.com/sOLWTYv2hD

An official with Biden’s campaign told Bloomberg that the former vice president made a mistake and was thinking about the mass shooting at Sandy Hook Elementary School in Connecticut, which took place in December 2012 while Biden was still in office.

Kate Bedingfield, a Biden spokeswoman, sent out a link on Twitter on Aug. 11 about Biden meeting with Parkland students, along with a comment.

Biden’s flubs came after he told a crowd of mostly Asian and Latino people on Aug. 8 that “poor kids are just as bright and just as talented as white kids.”

The line was highlighted by President Donald Trump’s campaign team. Andrew Clark, rapid response director for the campaign, wrote of the “slip-up” on Twitter: “Yikes … have fun mitigating that one.”

Biden later told reporters that the crowd understood what he meant.

Biden also told a crowd at the state fair that “we choose truth over facts.”

At another point on Aug 8, he insisted to a reporter that Trump didn’t condemn neo-Nazis after Charlottesville, even though there’s video evidence showing the president doing just that.

Earlier in August, Biden mixed up the locations of the recent mass shootings, which took place El Paso, Texas, and Dayton, Ohio, saying they happened in Houston and Michigan.

Trump’s campaign hammered Biden for his “poor kids” gaffe, saying it was part of “a pattern.”

Trump later told reporters that Biden “is not playing with a full deck.”

“He made that comment, I said, ‘Whoa!’” the president said.

“Donald Trump is desperate to change the subject from his atrocious record of using racism to divide this country,” Bedingfield said in response to Trump.

“Vice President Biden misspoke and immediately corrected himself during a refrain he often uses to make the point that all children deserve a fair shot, and children born into lower-income circumstances are just as smart as those born to wealthy parents,” she said.

The Trump campaign noted that Biden suggested in 2007 that one reason Washington schools fail is because they have a high percentage of minorities.

Trump took to Twitter over the weekend, adding: “Joe Biden just said, ‘We believe in facts, not truth.’ Does anybody really believe he is mentally fit to be president? We are ‘playing’ in a very big and complicated world. Joe doesn’t have a clue!”

Joe Biden just said, “We believe in facts, not truth.” Does anybody really believe he is mentally fit to be president? We are “playing” in a very big and complicated world. Joe doesn’t have a clue!