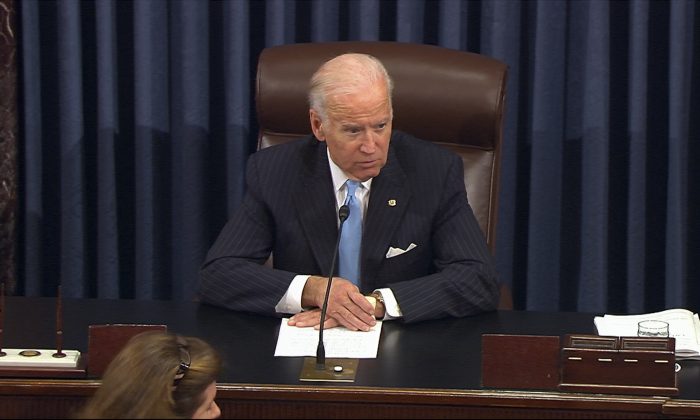 Vice President Joe Biden presides over the Senate at the U.S. Capitol in Washington, on Dec. 5, 2016. (Senate TV via AP)
Politics

Joe Biden: Hillary Clinton Never ‘Really Figured Out’ Why She Ran for President

More than a month after Election Day, Vice President Joe Biden attempted to explain why the Democratic Party failed to capture the presidency, House, and Senate.

Democratic candidate Hillary Clinton, he said, never figured out why she ran for president in the first place and lacked a clear campaign vision.

“I don’t think she ever really figured it out,” Biden told the Los Angeles Times. “And by the way, I think it was really hard for her to decide to run.” He noted leaked WikiLeaks emails that showed her campaign lacked a clear focus.

The vice president said she likely felt obliged to run to become the first female president.

“She thought she had no choice but to run. That, as the first woman who had an opportunity to win the presidency, I think it was a real burden on her,” Biden said.

After the devastating loss on Nov. 8, Biden said that Democrats need to come up with a better message to middle-class people who felt left out of the economy. He stressed that Trump’s win wasn’t because of racism and sexism.

“They’re all the people I grew up with,” he was quoted as saying. “They’re their kids. And they’re not racist. They’re not sexist. But we didn’t talk to them.”

The Democrats has also become the party of elites, he added.

“A bit of elitism [has] crept in” to the Democratic Party, Biden told the LA Times.

“What are the arguments we’re hearing? ‘Well, we’ve got to be more progressive.’ I’m not saying we should be less progressive,” Biden added. “We should be proud of where the hell we are, and not yield an inch. In the meantime, you can’t eat equality.”