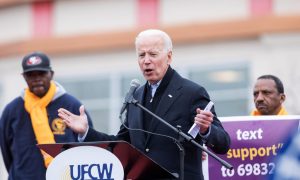 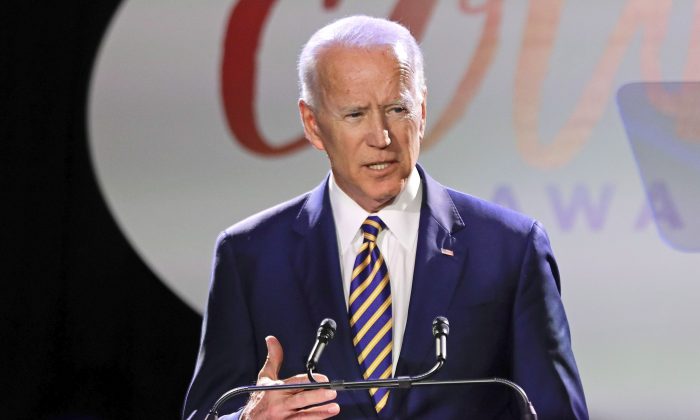 Former vice president and current presidential candidate Joe Biden said during a campaign stop in California on May 8 that the United States has an “obligation” to give free health care to illegal aliens.

Biden made the comment while responding to a reporter who asked whether “law-abiding” illegals should be given federal benefits.

“I think that anyone who is in a situation where they’re in need of health care, regardless of whether they are documented or undocumented, we have an obligation to see that they are cared for,” Biden said in reply. “That’s why I think we need more clinics around the country.”

Joe Biden says the US should provide healthcare to people “regardless of whether they are documented or undocumented.” pic.twitter.com/19La4DEtXK

Biden also challenged the notion that many illegal aliens were coming from the Southwest border, saying that the United States needs to “tone down the rhetoric” against illegals.

“By the way, a significant portion of undocumented folks in this country are there because they’ve overstayed their visas,” the former vice president said. “It’s not people breaking down gates coming across the border, so the biggest thing we got to do on this thing is just tone down the rhetoric. We know why it’s happening. It’s to create fear and concern.”

But numbers from the Customs and Border Protection (CBP) illustrate a different picture. In April, CBP agents detained 109,144 migrants, which is an increase of about 5 percent from March and the highest monthly figure since 2007. This includes more than 58,000 migrant parents and children and 8,800 unaccompanied children taken into custody, according to Homeland Security figures.

Additionally, in the Rio Grande Valley (RGV) Sector alone, more than 10,000 illegal aliens were apprehended this past week, making it one of the highest weekly total ever experienced in this sector, according to CBP. Moreover, over 7,000 illegal aliens are in custody at stations and processing centers.

Carla Provost, chief of U.S. Customs and Border Patrol, said on May 8 during a hearing of the Senate Subcommittee on Border Security and Immigration that “apprehension numbers are off the charts.”

“We cannot address this crisis by shifting more resources. It’s like holding a bucket under a faucet. It doesn’t matter how many buckets we have if we can’t turn off the flow,” she said.

In 2014, Biden, who was then-vice president, claimed that illegal aliens are “already Americans” during a speech to the Hispanic Chamber of Commerce in Washington.

“You know, 11 million people live in the shadows. I believe they’re already American citizens,” Biden said, reported The Hill. “These people are just waiting, waiting for a chance to contribute fully. And by that standard, 11 million undocumented aliens are already Americans, in my view.”

According to the Sacramento Bee, providing health care to illegal aliens has been a major policy issue in California for the past year.

California Gov. Gavin Newsom has proposed expanding the current healthcare program, which already covers eligible immigrant children up to age 19 to participate in Medi-Cal regardless of immigration status, to include unauthorized young illegal aliens aged between 19 and 25.

Newsom’s office estimates that this would cost nearly $260 million to cover them in 2019-20.