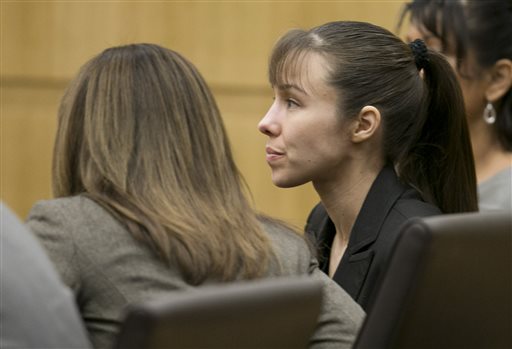 Jodi Arias listens as the verdict for sentencing is read for her first degree murder conviction at Maricopa County Superior Court in Phoenix, Ariz., on Thursday, May 23, 2013. (AP Photo/The Arizona Republic, David Wallace, Pool)
US

The Jodi Arias trial will continue in 2014, according to the latest update from Steven Alexander, the brother of victim Travis Alexander.

The next hearing date is scheduled for January 3 while the trial is set to start in mid-Febuary, Alexander said on the Facebook page “Justice for Travis Alexander.”

“We believe this is a tactic to try and get us to throw in the towel. We will not! I say again it won’t happen,” he said. “Our family will come together and see it through until it is finished. There is a monster that haunts us, but once the correct sentence is given, it’s her who will be haunted until the most the most humane punishment comes to her. Nothing compared to the sentence she gave to a good man. Anyhow, the entire Alexander family thanks all of you. Thank you for having our backs.”

The trial began highly publicize with multiple national media outlets reporting on scene, but the judge in charge of the case has since shut out news agencies and the public from the case.

Arias was convicted of murder in May, but the jury couldn’t reach a verdict on her sentence. Prosecutors are now pursuing a second penalty phase with a new jury in an effort to get the death penalty. No date for a new trial has been set.

Arias, 33, admitted she killed her boyfriend in 2008 at his suburban Phoenix home but claimed it was self-defense. Travis Alexander suffered nearly 30 knife wounds, had his throat slit and was shot in the forehead in what prosecutors argued was a jealous rage.

Judge Sherry Stephens has held hearing after hearing behind closed doors as the next steps of the case unfold almost entirely under a shroud of secrecy. Over the last several months, she has heard arguments over sequestering the new jury, moving the case out of Phoenix, Arias’ desire to fire her lead attorney ,and allowing live television coverage of the retrial, among other issues.

She has denied each request, but quietly with orders released days after the secret hearings as the case languishes without public scrutiny even as Arias’ legal tab is being picked up by taxpayers at a cost exceeding $1.7 million.

Steven Alexander has given updates about the moves on the Facebook page, including the series of defense motions denied.