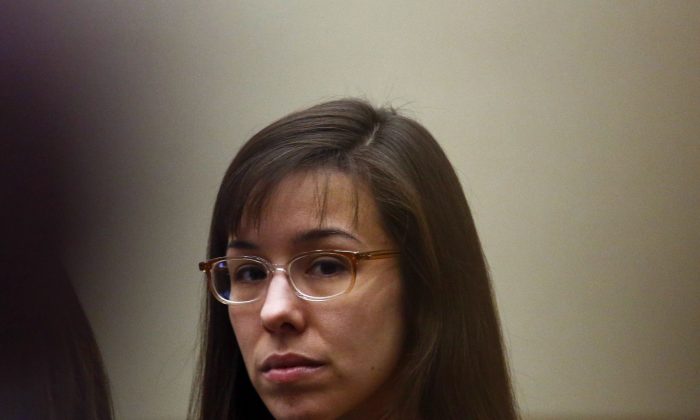 Jodi Arias looking at the family of Travis Alexander as the jury arrives during the sentencing phase of her trial at Maricopa County Superior Court in Phoenix, on May 15, 2013. ( Rob Schumacher/The Arizona Republic/File/AP Photo/)
Crime and Incidents

Jodi Arias Trial: Sentencing Phase Not Rescheduled Yet by Judge

The sentencing phase for Jodi Arias still hasn’t been decided on after an abrupt postponement earlier this month.

Jury selection for the sentencing phase was supposed to start on March 17. That date was set after months of hearings.

However, it came to light several weeks ago that prosecutor Juan Martinez, who is in charge of the Arias trial for the county, has a case that is slated to start on May 12.

That case is for Bryan Hulsey, charged with murdering Glendale police officer Anthony Holly in 2007.

The Hulsey case has been repeatedly postponed, according to the Arizona Republic, and Martinez doesn’t want to see it postponed any further.

He attended a hearing about the scheduling conflict via telephone because he is on medical leave for undisclosed reasons. He suggested that another prosecutor be appointed to the Hulsey trial, but a supervisor who was in the courtroom said that that wouldn’t happen.

Maricopa County Superior Court Presiding Criminal Judge Joseph Welty decided that Judge Sherry Stephens, who is presiding over the Arias trial, will decide when to reschedule the Arias trial for.

Arias was convicted of murdering her boyfriend Travis Alexander in his Mesa home in 2008.

The jury in the case couldn’t come to a unanimous decision over sentencing. Under Arizona law, prosecutors have the option of re-starting the penalty phase with a new jury.