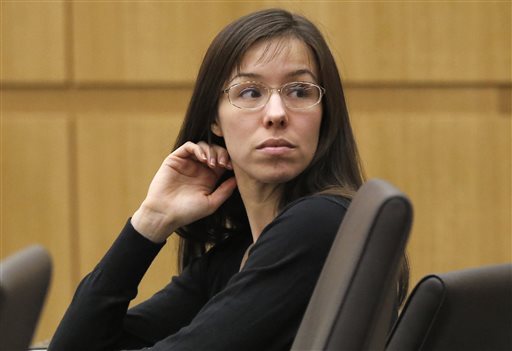 In this Jan. 9, 2013 file photo, Jodi Arias appears for her trial in Maricopa County Superior court in Phoenix. (AP Photo/Matt York, File)
US

The judge in the Jodi Arias murder case has denied video coverage for the new sentencing phase.

A pack of media outlets in Arizona had requested to be allowed to broadcast up to 30 minutes of footage at the end of each day in trial updates, but Stephens ruled Monday against the request.

Cameras will still be allowed inside the courtroom, while live tweeting will be allowed, reported KTAR, citing a court document.

Photography will also be allowed.

“The Court is mindful of its obligation to allow public and media access to the trial. That access should not include live broadcast of the trial prior to a verdict for the reasons addressed in previous sealed proceedings. The public and media may attend the penalty phase trial each day. The media will be permitted to videotape the trial each day using their own equipment. The videotaped recordings may be played after a verdict has been reached,” the document said.

“During the trial, Court policy allows the media to ‘tweet’ from the courtroom. A still camera has been authorized to be in the courtroom during the trial. At the conclusion of the trial, the Court’s FTR recordings will be available to the public following a public record request and payment of required fees. In the event there are insufficient seats in the courtroom, Maricopa County Superior Court Administration has authorized an overflow room for those who wish to view the trial.”

The ruling was announced ahead of the start of the new sentencing phase. Arias was convicted last year of murdering her former boyfriend Travis Alexander at his home in Mesa in 2008, but the jury couldn’t come to a unanimous decision on the verdict.

Under state law, the prosecutors were able to request a new sentencing phase.

The new phase was supposed to start in May but has been delayed several times. Now, jury selection is slated to start on September 29, and Stephens has vowed that no more delays will happen.