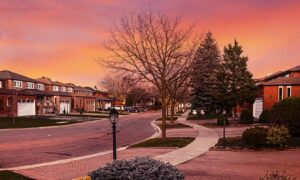 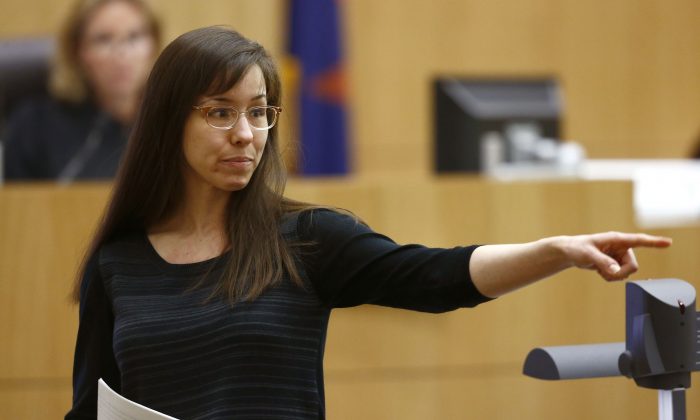 In this May 21, 2013 file photo, Jodi Arias points to her family as a reason for the jury to give her a life in prison sentence instead of the death penalty, during the penalty phase of her murder trial at Maricopa County Superior Court in Phoenix. (AP Photo/The Arizona Republic, Rob Schumacher, Pool)
US

Some new details about the jury selection for the Jodi Arias trial have been revealed.

An all-new jury is being selected because the last one couldn’t decide on a verdict for the convicted killer.

Under state law, prosecutors can elect to choose a new jury and press for the maximum conviction again, which in this case is the death penalty.

If the new jury also can’t come to a unanimous decision, then the death penalty is off the table and Judge Sherry Stephens will decide whether Arias, who was convicted of killing former boyfriend Travis Alexander, should spend the rest of her life in jail with no possibility for parole, or with a possibility for parole after 25 years.

The jury selection is slated to start on September 29 after months of delays. The selection was originally supposed to start in May.

The trial is on the court calendar until the last part of December, reported KTAR.

The outlet also revealed that both sides are working on the questionnaire that will be given to potential jurors.

On September 29, barring another delay, three panels of 100 jurors each will be called in and brought up to the courtroom to be questioned and either rejected or accepted for the jury.

Meanwhile, another Arizona columnist has come forward to make an argument in the ongoing debate on whether the sentencing phase should be televised or not.

Stephens has already barred live coverage, but some media outlets are pressing to be allowed to broadcast 30 minutes of footage each night. Right now, no footage is allowed to be shown until after the conclusion of the trial.

EJ Montini is the latest columnist to weigh in, saying that there’s plenty of legitimate reasons to allow the footage to be shown each night–such as the U.S. Constitution–but that it actually shouldn’t be allowed.

“Defense attorneys Kirk Nurmi and Jennifer Willmott are right to ask for the blackout. This second trial isn’t meant to decide guilt or innocence. It’s meant to determine life or death. The jury will have to decide (since the previous jury could not) if Arias should spend her life in prison or receive the death penalty,” he said.

“The entire exercise is a tremendous waste of time and money. The fact that the previous jury had trouble answering the death penalty question should have been proof enough that this is not a death penalty case. The Maricopa County Attorney should have dropped it and let Arias rot in prison. It would have saved the rest of us the expense.”

He added that “We had our fun with the first trial. Even worse, Arias had her fun. And is continuing to do so with things like the auction of her eyeglasses. This trial is different. The Jodi Show should be canceled. Our right to attend court proceedings can’t interfere with the ability of a defendant – even this one — to get a fair hearing.”