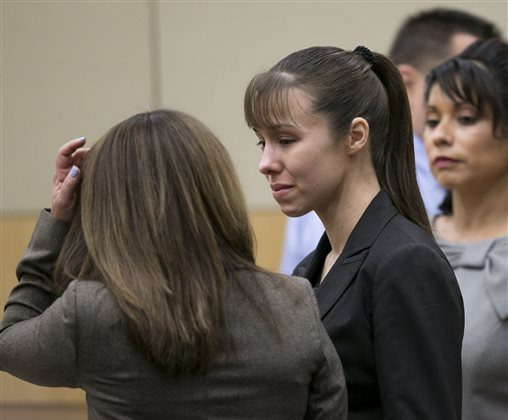 Jodi Arias Trial: Experts Weigh in on Decision to Represent Herself

Jodi Arias recently requested to represent herself in the sentencing phase of her trial, which is set to start on September 8.

Judge Sherry Stephens told Arias, who was convicted of killing her boyfriend Travis Alexander in 2008, that it isn’t in her best interest to represent herself but later granted the motion, with her lawyers shifting to her legal advisors.

Lead attorney Kirk Nurmi and second-chair attorney Jennifer Willmott are supposed to advise Arias but Nurmi has requested the court to let him quit, a motion that was denied in 2011. He’s asking for reconsideration because the situation has changed, reported the Arizona Republic.

Nurmi says that he and Arias don’t agree on defense strategy for the upcoming trial, which will determine the severity of Arias’ sentence. The maximum sentence is the death sentence.

Several lawyers weighed in on the decision by Arias to represent herself to CBS.

“She looks like a vicious psychopath with a ridiculous defense. If she can get just one juror to bond with her on some level, even if they hate her, they’re getting to know her, and it’s harder to kill someone you know.”

However, Horowitz said that the jury “may find her pathetic.”

Phoenix defense lawyer Mel McDonald, a former Maricopa County judge and federal prosecutor agreed that Arias doesn’t have much to lose by representing herself.

“I think generally that anybody that represents themselves has a fool for a client, but it also gives her a way, if she’s out there making a fool of herself, to maybe invoke some sympathy from a juror,” McDonald said.