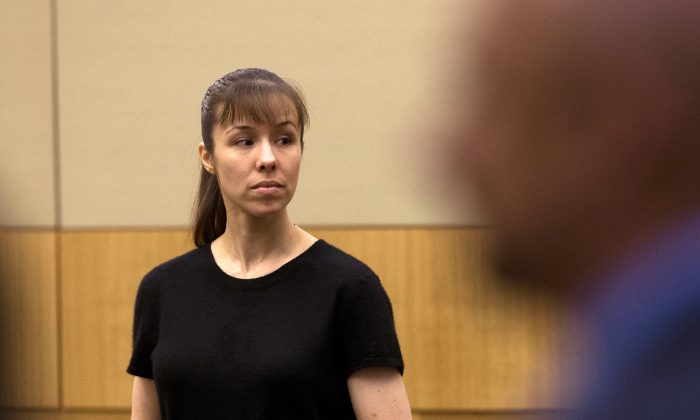 Jodi Arias stands as the jury enters the courtroom on Wednesday, May 22, 2013 during the penalty phase of her murder trial at Maricopa County Superior Court in Phoenix. (AP Photo/The Arizona Republic, Rob Schumacher, Pool)
Crime and Incidents

Jodi Arias, who could be sentenced to death for murdering her boyfriend Travis Alexander in 2008, has been using Twitter from jail.

It’s unclear how Arias is using Twitter from jail, but her tweets have been coming out for months, with the latest posted just five hours ago.

She’s used Twitter to respond to accusations that she vowed to kill prosecutor Juan Martinez if he got the death penalty in the trial, saying “To comment on the babblings of a lunatic is lunacy itself. (oops).”

She’s used Twitter to comment on a toilet problem in jail, musing about “how many hundreds of thousands of gallons of water wasted” when a toilet gets stuck on “flush.”

She’s used Twitter to try to sell prints from her personal art collection, and wristbands, saying that it would help raise funds for her defense.

Arias was convicted of murdering Alexander but she has claimed it was in self-defense.

The first phase of the trial ended with a jury not reaching a decision on whether to sentence her to life in prison or to death, so Martinez requested another phase to try to get the death sentence.

If she got life in jail she would be eligible for release in 25 years.

The pre-trial phase continues on January 13, and the trial is expected to re-start in mid-February.