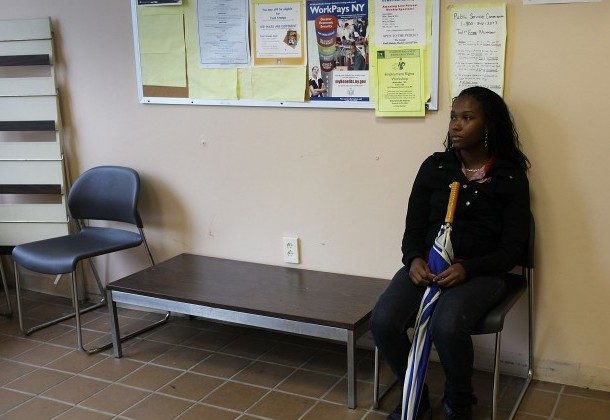 Shandola Williams waits in an employment office on May 14, in Utica, New York. Like many upstate New York communities, Utica is struggling to make the transition from a former manufacturing hub. (Spencer Platt/Getty Images)
US

NEW YORK—Despite an addition of more than 312,000 jobs in the state over the past two years—almost 95 percent of the jobs lost during the recession—unemployment has been rising, according to a report by state Comptroller Thomas P. DiNapoli.

New York’s unemployment rate is currently 8.5 percent, up from 8 percent one year ago.

“New York’s economy is slowly recovering, but challenges remain, including the European debt crisis and deficit cutting decisions in Washington,” DiNapoli said in a release. The slowing national economy could also be impacting New York’s recovery, according to DiNapoli. “We are not out of the woods yet.”

New York City, with 44 percent of the jobs in the state, remains strong after gaining 181,000 jobs since the recession. This is almost 41,000 more than the city lost during the same period. A report by Eastern Consolidated, a real estate investment services and research firm, found that 10,200 jobs were added in the city in April alone, while so far in 2012 the private sector added 60,000 jobs.

More than half of the counties in the state had a higher unemployment rate in April than the 8.5 percent average statewide rate. Eight counties have rates of 10 percent or higher. Also, 45 percent of unemployed people in the state have spent more than six months without a job, according to the comptroller’s report.

The gain in jobs statewide has also “been partially offset … by the loss of 23,200 government jobs,” according to the report.