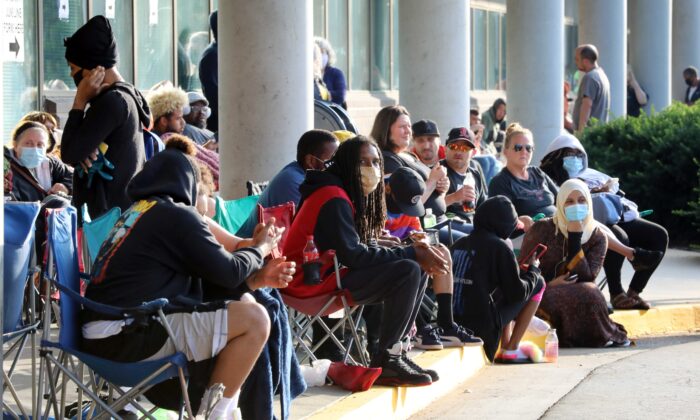 Hundreds of unemployed Kentucky residents wait in long lines outside the Kentucky Career Center for help with their unemployment claims, in Frankfort, Kentucky, on June 19, 2020. (John Sommers II/Getty Images)
Economy

Claims for state unemployment have risen to their highest levels in three months, according to new data (pdf) from the Labor Department.

A seasonal spike in unemployment claims in January is consistent with annual patterns, as temporary holiday workers return to unemployment and many outdoor constructions are suspended because of harsh weather. Though the Labor Department attempts to control for these factors in its data, doing so has been difficult in the pandemic economy.

One of the main factors in this larger-than-average rise in unemployment claims is likely the Omicron variant of the CCP virus, which has resulted in temporary closures and layoffs and driven up unemployment totals.

Though workers are ineligible for unemployment when they personally test positive for the virus, they nonetheless can find themselves out of work and eligible to apply when they are prevented from working by possible exposure or by workplace shutdowns. Thus, for the duration these employees are unable to show up to work, they contribute to the total number of unemployment claims, temporarily raising weekly averages.

Omicron cases are typically less severe than previous iterations of the CCP virus, but the variant is highly transmissible, causing a rapid surge in cases throughout December and early January. On Jan. 15, average cases reached a new record of over 798,000, though official counts of average death remain well below those recorded one year ago.

However, with many experts ascertaining that Omicron has already peaked or will soon peak, the transition from pandemic to endemic seems more imminent than ever before. Though it is unclear how rapid the decline in cases may be, it can be inferred that the coming months will see a significant drop-off in case totals. If this pattern holds, it is likely that this winter’s surge in unemployment claims will subside, ultimately constituting an anomaly within a broader trend of job recovery.