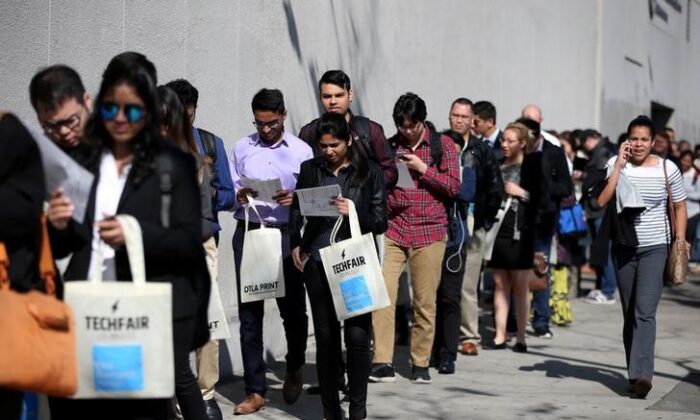 The number of Americans filing for unemployment benefits surged to a 30-month high last week, suggesting a pickup in layoffs as the COVID-19 pandemic undercuts economic activity.

Initial claims for state unemployment benefits jumped 70,000 to a seasonally adjusted 281,000 for the week ended March 14, the highest level since September 2017, the Labor Department stated on March 19 (pdf). Data for the prior week was unrevised.

Economists polled by XTB had forecast claims would increase to 218,000 in the latest week. The Labor Department attributed the jump in claims to COVID-19, the respiratory illness caused by the CCP virus.

The Epoch Times refers to the novel coronavirus as the CCP virus because of the Chinese Communist Party’s initial coverup and mismanagement of the outbreak, which helped the virus to spread across China and become a global pandemic.

The Labor Department said in a release that the spike in initial jobless claims is “clearly attributable to impacts from the COVID-19 virus.”

“A number of states specifically cited COVID-19 related layoffs, while many states reported increased layoffs in service-related industries broadly and in the accommodation and food services industries specifically, as well as in the transportation and warehousing industry, whether COVID-19 was identified directly or not,” the Labor Department stated.

President Donald Trump has been meeting with industry executives to gauge the impact of the virus on the U.S. economy and to determine relief actions.

In a March 17 meeting with representatives of the tourism industry, U.S. Travel Association CEO Roger Dow said the travel slowdown could wipe out hundreds of billions in total travel spending and lead to millions of job losses.

On March 18, a national restaurant association representing about half a million eateries estimated the hit from COVID-19 to U.S. foodservice sales will be $225 billion, while the full economic impact could be as much as $675 billion.

The National Restaurant Association wrote to Trump and congressional leaders on March 18, projecting that in the next three months, the outbreak-related economic fallout could lead to the loss of between 5 and 7 million jobs.

“We know your industries are among the hardest hit,” Trump told the representatives of the tourism industry, which includes restaurants. “We are going to come out stronger than ever before.”

“We literally had the strongest economy on earth,” Trump said, noting that more than 124 countries have been affected. “Unbelievable.”

On March 16, Trump signed off on an emergency aid package passed hours earlier in the Senate.

The emergency aid package will provide paid sick and family leave for a number of Americans, offer free CCP virus testing, and bolster unemployment insurance. It’s the second such aid package this month.