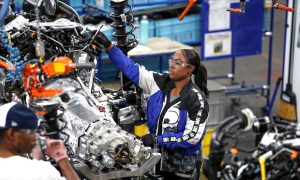 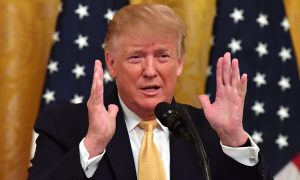 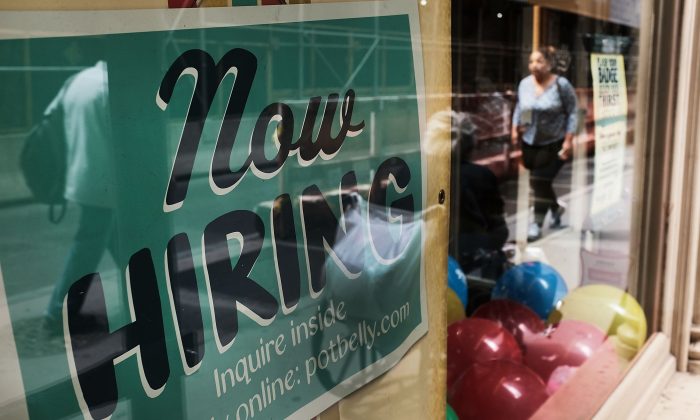 A store advertises that they are hiring in lower Manhattan on June 1, 2018. (Spencer Platt/Getty Images)
Business

The jobless claims figures published Feb. 20 (pdf) by the Labor Department show that initial claims for state unemployment benefits increased 4,000 to a seasonally adjusted 210,000 for the week ended Feb. 15, a figure in line with forecasts by economists polled by Reuters.

The four-week moving average of initial jobless claims, considered a better measure of labor market trends as it irons out week-to-week volatility, fell 3,250 to 209,000 last week, suggesting sustained labor market strength that could help to buoy the economy amid risks from the coronavirus outbreak and weak business investment.

Minutes of the FOMC’s Jan. 28–29 meeting published Feb. 19 showed policymakers “judged that conditions in the labor market remained strong,” and “expected payroll employment to expand at a healthy pace this year.”

The Fed also said it “expected economic growth to continue at a moderate pace,” but expressed concern about possible economic risks from the deadly coronavirus.

Some FOMC participants also expressed concern about financial imbalances like high levels of corporate debt and elevated valuations of stocks and commercial real estate, which they argued had the potential to “amplify an adverse shock to the economy.”

“The 3-month moving average of job gains is 211,000, overall a strong level,” Reece said in the report, referring to the “non-farm payrolls” figures tracked by the Department of Labor.

“I’d get incrementally negative on this picture if the 3-month average for job gains fell below 135,000,” he noted.

Another gauge that he said paints a positive picture is U.S. unemployment momentum, a comparison between the unemployment rate and its 12-month moving average.

“I’d get incrementally negative on the business cycle outlook if the unemployment rate moved above its 12-month moving average while the labor force participation rate trended lower,” he noted.

The labor force participation rate is at a seven-year high in the United States.

Still, labor market momentum could slow this year, with job openings dropping to a two-year low in December.

“Job openings have plunged over the past year,” according to a recent Deutsche Bank research note jointly authored by economists Matthew Luzzetti, Brett Ryan, and Justin Weidner.

The economists blamed weaker demand for the job openings slowdown, which they argued was “evidenced by a softening in the trends for overtime hours and the average workweek as well as stagnating wage growth.”

But the analysts concluded that, despite soft spots, the labor market “does not signal an imminent slowdown in activity.”

“As our recent work on jobless claims showed, as long as continuing claims remain at low levels, near-term recession risks will be subdued,” they said, referring to people remaining on unemployment after filing an initial claim.

The Feb. 20 Labor Department jobless claims report showed the number of people receiving benefits after an initial week of aid increased 25,000 to 1.73 million for the week ended Feb. 8.

However, the four-week moving average of the continuing claims fell 5,250 to 1.72 million.

The FOMC minutes also show that the Fed believes that while inflation pressures came in softer than expected, the U.S. consumer remains confident.

“Key factors that influence consumer spending—including the low unemployment rate, the upward trend in real disposable income, high levels of households’ net worth, and generally low-interest rates—remained supportive of solid real PCE growth in the near term,” the Fed judged, referring to the Personal Consumption Expenditures inflation index against which the Fed measures its own inflation target, the so-called symmetric 2.0 percent objective.

In the minutes, the committee also cited recent University of Michigan and the Conference Board consumer sentiment surveys to reinforce its characterization of consumer confidence as “strong.”