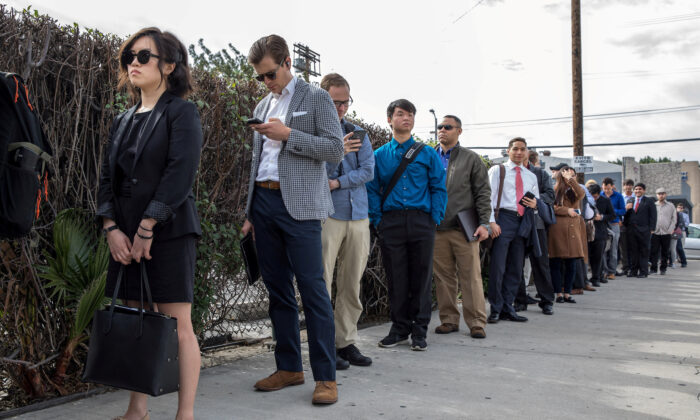 A Goldman Sachs analyst said that the next round of initial jobless claims, a measure of Americans filing new unemployment claims, could soar to 2.25 million due to the COVID-19 hit to the economy, which would be over 700 percent higher than the most recent figure.

The Department of Labor said in a release that last week’s jobless claims came in at a seasonally adjusted 281,000, which represents a 30-month high. The record so far for initial jobless claims is 695,000 weekly claims, set in 1982.

The Labor Department said the spike in unemployment claims is “clearly attributable to impacts from the COVID-19 virus.”

Goldman Sachs economist David Choi wrote in a note on March 19 that this week’s newly filed unemployment claims, which will be officially published on March 26, could be as much as 700.7 percent higher than last week’s.

“Many U.S. states have reported unprecedented surges in jobless claims this week,” Choi wrote, Bloomberg reports. “While it is possible that claims were front-loaded to start off the week—implying a slower pace of claims for the week as a whole—or that our sample is biased toward states with a larger increase in claims, even the most conservative assumptions suggest that initial jobless claims are likely to total over 1 million.”

Even at the lower range of 1 million new jobless claims, this represents a 256 percent rise compared to last week’s numbers.

The Harvard-educated economist issued his predictions based on preliminary jobless claims filings in 30 states, Bloomberg said, and on anecdotal evidence.

“State-level anecdotes point to an unprecedented surge in layoffs this week,” Choi wrote in the note, Newsweek reported. “These anecdotes suggest that the next jobless claims report covering the week of March 15-21 will show that initial claims rose to roughly 2.25 million, the largest increase in initial jobless claims and the highest level on record.”

“Anecdotes from a wide range of sectors also suggest an unprecedented decline in revenues across many industries. Consumer spending on sports and entertainment, hotels, restaurants, and public transportation in particular have already dropped dramatically,” Choi wrote, according to Newsweek.

As the number of Americans filing for unemployment benefits surged by 70,000 last week, the Labor Department blamed both direct and indirect impacts from the CCP virus.

“A number of states specifically cited COVID-19 related layoffs, while many states reported increased layoffs in service-related industries broadly and in the accommodation and food services industries specifically, as well as in the transportation and warehousing industry, whether COVID-19 was identified directly or not,” the Labor Department stated.

President Donald Trump met this week with industry executives to gauge the impact of the virus on the U.S. economy and to determine relief actions.

In a March 17 meeting with representatives of the tourism industry, U.S. Travel Association CEO Roger Dow said the travel slowdown could wipe out hundreds of billions in total travel spending and lead to millions of job losses.

“We know your industries are among the hardest hit,” Trump told the representatives of the tourism industry, which includes restaurants. “We are going to come out stronger than ever before.”

“We literally had the strongest economy on earth,” Trump said, noting that more than 124 countries have been affected. “Unbelievable.”

Members of Trump’s economic team were convening Friday on Capitol Hill to launch negotiations with Senate Republicans and Democrats racing to draft a $1 trillion-plus economic rescue package amid the CCP virus outbreak.

“We hope to see the Congress act on that early next week,” Vice President Mike Pence said during an afternoon press conference.

The rescue package is the biggest effort yet to shore up households and the U.S. economy as the pandemic and its nationwide shutdown hurtles the country toward a likely recession.