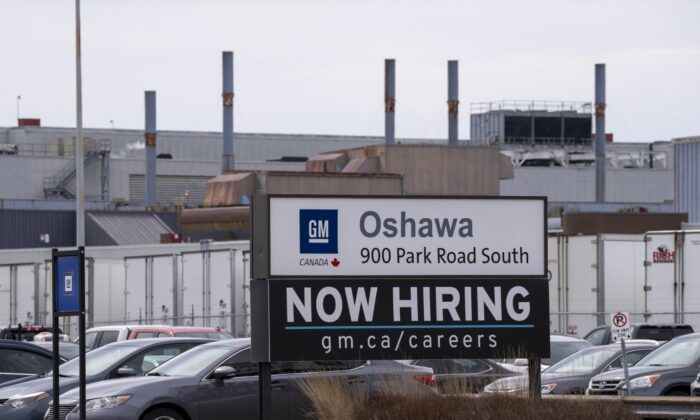 A sign announcing hiring sits at the General Motors facility in Oshawa, Ontario on April 4, 2022. (The Canadian Press/Frank Gunn)
Canada

The agency said employers were seeking to fill more than one million positions at the beginning of March, up 186,000 positions or 22.6 percent from February and 382,000 or 60.5 percent from the prior year.

The non-seasonally adjusted job vacancy rate, which measures the number of vacant positions as a proportion of all positions, was 5.9 percent in March, matching the record high in September 2021.

Vacancies increased by more than one-third in accommodation, food services and retail while there were record vacancies in health care, social assistance and construction.

Employers in the accommodation and food services sector were looking to fill 158,000 positions with the vacancy rate of 12.8 percent being the highest of all sectors for the 11th consecutive month.

Job vacancies were up in all provinces with the largest increases in Saskatchewan, Nova Scotia and Newfoundland and Labrador.

Before March, job vacancies had fallen for five consecutive months due to seasonal patterns with increased economic activity driving higher demand for labour.

A record-low unemployment rate of 5.3 percent and record high 88.6 percent labour force participation rate resulted in an average of 1.2 unemployed people for each job vacancy in March, down from 1.4 in February and 2.6 in March 2021.

Ratios were lowest in Quebec and British Columbia and highest in Newfoundland and Labrador.

Meanwhile, average weekly earnings increased 0.9 percent from February and 4.3 percent on a year over year basis, double the increase seen a month earlier. The Consumer Price Index increased 6.7 percent in March, from March 2021.

Statistics Canada also said the number of people working in retail surpassed its pre-pandemic level for the first time in March.

The sector’s employment was on par or higher than two years earlier in all provinces, except Ontario and Manitoba which were respectively 5,400 and 2,100 positions short of where they were before the COVID-19 pandemic prompted mass layoffs.

More than half of the subsectors within retail reported payroll employment increases in March, led by food and beverage (up 7,400 jobs) and clothing and accessories stores (up 3,300).

Grocery store employment was 2.8 percent above its pre-pandemic level in March, but beer, wine and liquor store jobs were 5.1 percent or 2,600 positions below its level in February 2020.

Overall, the agency said employment increased by 118,000 or 0.7 percent between February and March to 17.3 million as public health measures eased and capacity limits were generally lifted.

The gains were driven by the services sector with seven provinces seeing increases led by Quebec which reopened bars, taverns and casinos on Feb.28.

All provinces except Alberta and Newfoundland and Labrador surpassed pre-pandemic levels in March.