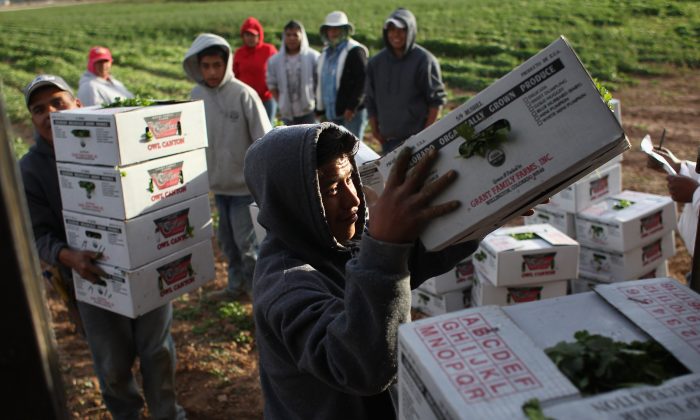 Compared to American citizens, low-skilled immigrants earn less, but land more jobs. They’re so much better at getting jobs it actually tells us something about the U.S. job market—and it’s not a tale of the American Dream.

Contrary to widespread impression, low-skilled immigrants bring a number of benefits to the U.S. economy. They fill jobs Americans don’t want, consume services which in turn creates jobs, and can even convince companies not to off-shore their operations.

But some of these benefits are actually bad omens.

In 2013, the nation had almost 25 million low-skilled workers, that is people over 25 years old without high school diploma. Almost 10 million of them were immigrants (both legal and illegal) and of those 7 million were Hispanic immigrants, Bureau of Labor Statistics survey data shows.

Among those 7 million, over 60 percent had jobs, which is an impressive number.

By contrast, of the over 2.3 million Hispanics born in United States who are in the same situation (over 25, without high school diploma), less than 40 percent of them had jobs. Even worse, among African-Americans in this situation only 25 percent had jobs.

Employers in traditionally low-skilled sectors, like agriculture, construction, and some services, depend heavily on immigrants. They just can’t find Americans to fill such positions.

If one is over 25 without high school diploma, and statistically, probably not rich, why wouldn’t one want to take one of those hard-to-fill low-skill jobs?

A common argument is that it’s because those jobs have already been filled with immigrants. But what’s stopping Americans from at least competing for those jobs?

One big reason they’re not, is that jobs low-skilled immigrants are willing to accept pay significantly less.

Immigrants with high school or less education earn about 16 percent less than Americans with the same level of education.

Immigrant workers with no high school diploma live, on average, on $22,000 a year. Finishing high school bumps the number up to over $29,000.

This is also one of the reasons why an influx of immigrants can stop companies from going overseas: Low-skilled immigrants are willing to work for less.

Education is still the ticket to a better pay, but an unlimited supply of high-skill well-paying jobs seems unrealistic.

Admittedly, while 40 years ago two thirds of jobs required no college education, in a couple of years the situation is expected to reverse. By 2018, two thirds of jobs will require at least some college, according to the Center on Education and the Workforce.

But higher education requirements don’t necessarily mean the jobs will be paid that much better. Even now, employers’ demand for better educated workers rises, while wages stagnate.

In fact, almost 40 percent of all jobs created between 2009 and 2013 pay median wage under $14 an hour, according to Economic Modeling Specialists Intl, a labor market data cruncher.

In other words, even in the 21st century, America will have a finite number of well-paid jobs and massive number of low-paid ones. Though hard to accept, millions of American workers may have to settle for jobs paying worse than ever, or end up with no jobs at all.