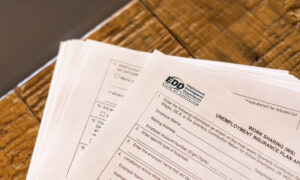 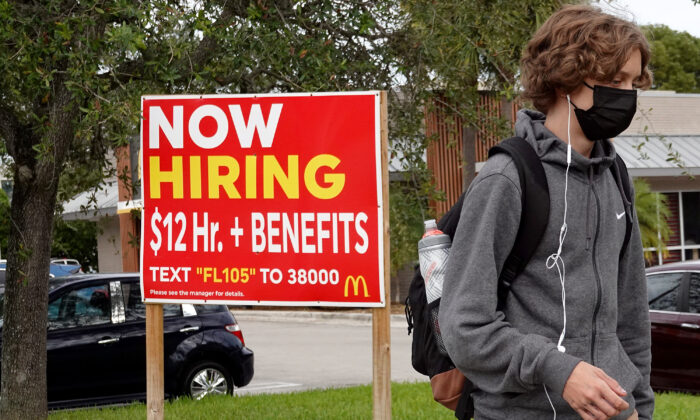 Job openings in the United States have eased from their recent record high, but remain historically elevated, and the quits rate has risen to an all-time high as the labor market disconnect persists where millions are unemployed while businesses struggle to find workers to fill vacant positions.

The Labor Department’s Job Openings and Labor Turnover Survey (JOLTS), released Oct. 12, showed that the number of job vacancies fell by 659,000 to 10.4 million on the last day of August, down from the prior month’s upwardly revised record high of 11.1 million. That’s the first drop in the measure so far this year.

The private sector accounted for 9.6 million job openings, with the bulk of the rest coming from state and local government (694,000) and a relatively small 142,000 contribution from the federal level.

The number of hires slipped to 6.3 million, with some analysts believing that persistent hiring difficulties were prompting businesses to forego hiring plans.

“Taken in context of the poor [August] Nonfarm Payrolls Report and the Delta variant slowing the economy at the time, could just be that some scrapped hiring plans given labor shortages,” Liz Young, head of investment strategy at SoFi, wrote on Twitter.

The JOLTS report also showed that the so-called quits rate—which reflects worker confidence in being able to find a better job—rose to a record high of 2.9 percent, painting a picture of job market tightness and growing pricing power of workers.

Illustrating this dynamic is the newest small business sentiment survey from the National Federation of Independent Business (NFIB), which showed that 51 percent of small-business owners in September reported job openings that could not be filled—a 48-year record high.

Republicans on the House Committee on Small Business have blamed President Joe Biden’s policies for the hiring woes.

“Biden has paid people to stay home for months, creating a labor crisis,” they wrote in a tweet. “Make no mistake, reckless Democrat spending policies are crushing Main Street USA.”

Commenting on jobs market dynamics, Queen’s College President and economist Mohamed El-Erian said in an Oct. 11 interview on CNBC’s “Squawk Box” that he believes the upward pressure on wages is so high, they’ll rise faster than consumer prices.

“My feeling is we’re going to see wage growth in excess of price inflation because for the first time in a very long time, labor has pricing power,” he said.

“People are scrambling to find workers. People are offering all sorts of bonuses that are soon going to translate into the whole wage ladder—so we’re going to see wages going up,” El-Erian added.

Consumer price inflation is running at around a 30-year high and well beyond the Fed’s 2 percent target, to the dismay of central bank policymakers who face increasing pressure to roll back stimulus, even as they fret that the labor market hasn’t fully rebounded from pandemic lows.

Average hourly pay, meanwhile, rose 0.6 percent in September, while over the past six months, it has averaged a gain of 0.5 percent per month, around twice the pace prior to the pandemic, last week’s jobs report showed.

The total number of unemployed persons in the United States now stands at 7.7 million. While that’s considerably lower than the pandemic-era high, it remains elevated compared to the 5.7 million just prior to the outbreak.

The reason for the sharp disconnect between the historically elevated number of job openings and the millions of unemployed remains unclear, with some economists blaming COVID-19 related factors like fear of infection, child care difficulties, people taking early retirement amid the pandemic, and a build-up in savings boosted by generous unemployment benefits and stimulus checks.