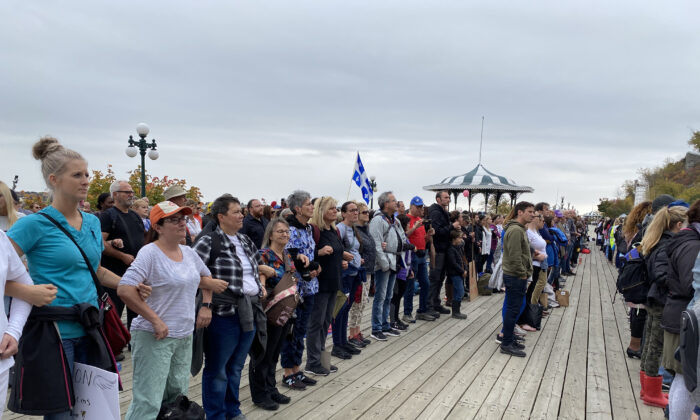 From doctors, to hockey families, to university students, the consequences of refusing the vaccine have been life-altering
By Isaac Teo

Health-care professionals losing their jobs, students denied access to education, and kids seeing their hockey dreams dashed—these are some of the complaints lawyers have dealt with in their cases challenging vaccine mandates.

Lisa Bildy, a lawyer based in London, Ont., who specializes in constitutional and human rights law, says the mandates are devastating for her clients because they are left with no real choice in getting the vaccine, contrary to what some officials have proclaimed.

“It isn’t a choice when it’s your livelihood, when it’s your future, when it’s your mental health and support [for] your family—all of those things at stake,” she said.  “To say to those people ‘you have a choice’ is just unbelievably callous.”

Bildy said she is currently facing a “deluge” of inquiries from doctors, hockey families, and university students looking for legal options amid the life-altering consequences of refusing the vaccine.

“It’s like nothing I’ve ever seen before,” she said. “People are desperate. They are at their wit’s end.”

In one case, a medical student told Bildy that she is being forced to make a choice between getting the shot or be kicked out of her education program, which would leave her with a “massive amount of debt” and no job prospects.

“She has very good reasons for not wanting to have the vaccine that are personal, but certainly understandable, and she’s been told that if she’s not vaccinated, she’s gone,” Bildy said.

Other university students Bildy represents have said their institutions told them they were “trespassing” and were banned from entering campus without vaccination proof, she said.

Some doctors have told Bildy that they were given 48 hours by their management to either get vaccinated or “voluntarily suspend” their privileges, Bildy added.

On Oct. 20, the United Health Care Workers of Ontario, which represents over 3,000 front-line health-care workers, issued a letter to Premier Doug Ford urging him not to proceed with the suspension of the approximately 15 percent of unvaccinated health professionals in the province, which could jeopardize the health system.

“It would be irresponsible and negligent to put our health care system at risk by mandating vaccines, thereby purging tens of thousands of Ontario’s frontline health care workers out of the system,” the letter said.

Bildy is concerned that a brain drain in the medical field is about to happen—particularly of doctors—as “virtually no exemptions are being granted” even though their reasons for not complying are “unique, informed, and rational.”

“These doctors will leave their hospitals, maybe even their careers & very likely the country. There are friendly U.S. states that pay doctors better anyway, & don’t require the jab in order to work,” she wrote on Twitter on Oct. 20.

A similar ordeal is playing out for kids who dream of competing in major league hockey one day, said Bildy, who was contacted by “a lot of hockey families” after the minor leagues mandated vaccination for children as young as 12.

The Ontario Minor Hockey Association announced on Sept. 3 that players aged 12 and older must be fully vaccinated by Oct. 31—despite the fact that the Ford government said children 12 to 18 can enter sport and recreation facilities without having to show proof of vaccination.

“These kids shouldn’t have to be missing out on hockey when it isn’t even mandatory for that age group to have the vaccines in order to play,” Bildy said.

She added that while she’s tried to help some families get exemptions through religious or medical grounds, it’s still an uphill task.

“They’re just getting a blanket denial [from] the hockey leagues,” she said, adding some families are pulling their kids out of the leagues while others are taking a break for the season.

“There’s just absolutely no compassion for these kids,” she said. “[The hockey leagues] are the gatekeepers. They have complete control over whether these kids will have a future in hockey in this country.”

Mandates Go Beyond ‘Any Rational Basis’

Sayeh Hassan, a staff lawyer at the Justice Centre for Constitutional Freedoms, says she has received numerous requests for help from university and college students after being told by their institutions to get the shot even though their classes are held online.

“Even if people are studying from home, doing it virtually, there’s still a requirement to be vaccinated, which really doesn’t have any rational basis,” Hassan told The Epoch Times.

She cited another example of an Ontario father of two young children who was pursuing a degree in mechanics but couldn’t complete the program after the college forbade him from entering the on-campus workshop because he didn’t get vaccinated.

“That’s just one person out of thousands and thousands of people who are going through similar situations, very tragic situations,” she said.

Hassan also decried the lack of medical exemptions for people who experience severe side effects to the vaccine.

“I’ve heard from a lady who was in her mid-30s, very healthy,” she said. “She’s a single mom of two, had her first shot, and then a couple of weeks later, started having heart problems, and she’s now on two heart medications.”

She finds it “unbelievable” that such people are not granted medical exemptions and are required to take a second dose “even after having health reactions and health conditions because of the vaccine.”

On the business side, Hassan said the Justice Centre is hearing from gym and restaurant owners who do not want to mandate the governments’ proof-of-vaccination regime for their clients.

“What’s happening with these people essentially is they’re putting their livelihoods, their businesses, at risk and standing up for what they think is the right thing—and that is not to discriminate against people based on their vaccination status.”

Ryan O’Connor, a Toronto-based lawyer who specializes in areas such as employment and appeals, says he has heard from business owners throughout the pandemic who have decided to relocate their businesses to other jurisdictions, mainly the United States.

“It’s been very difficult to operate a business with all of the public health restrictions that have been in place over the last 19 months, locally and also provincially,” he said.

“So it stands to reason that at least some persons who are subject to restrictions and mandates in the workplace might then decide to go to a jurisdiction that may be a little bit more open for business.”

O’Connor, who also advises clients on matters involving federal and provincial legislation, thinks the vaccine mandates will eventually be imposed across industries in the public as well as the private sector.

But he said the Ontario government’s announcement on Oct. 22 that it plans to gradually lift all public health restrictions by March 2022 sounds promising.

“At least there’s a signal from the province that these mandates may be temporary, but if they’re going to be temporary, then I hope that individuals would think long and hard about terminating someone’s employment,” he said.

“Because once someone loses a job, it’s a little harder to get it back.”

O’Connor stressed that instead of “maligning” individuals who seek vaccine exemptions, they should be treated with compassion and understanding.

“There are various reasons why individuals cannot be or are unable to be vaccinated: religious belief, a disability they experience, their medical status, their age, or because they wish to wait,” he said.

“Instead of being treated as expendable in the workplace, or that they should be denied access to an education, a little bit of understanding, care, and compassion will go a long way to resolving some of these issues.”