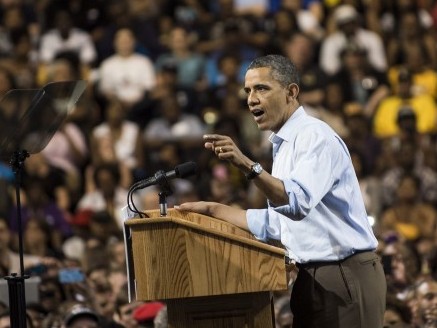 US President Barack Obama speaks during a campaign event on May 5, in Richmond, Virginia. (BRENDAN SMIALOWSKI/AFP/GettyImages)
US

A slowdown in U.S. job growth sent Wall Street tumbling Friday and undercut the economic momentum President Barack Obama was hoping to bring to the official launch of his re-election campaign over the weekend.

The U.S Labor Department said Friday just 115,000 new jobs were created in April, the lowest in six months. Although unemployment figures fell slightly, from 8.2 percent in March to 8.1 percent in April, , the fall was not due to more people gaining jobs but credited instead to fewer people looking for work. The proportion of adults either working or actively seeking work fell to 63.6 percent, its lowest in 30 years according to department data.

Without referring specifically to the job slowdown Obama told supporters his campaign was still about hope and change; but acknowledged that for many that hope had been dashed by hard economic times, noting that 3 million jobs had been lost before he took office.

“It was tough. But I tell you what, Ohio. The American people are tougher,” he said.

He pointed to the strong job growth in previous months but acknowledged that the economic recovery would take time and there was much more to do.

“Are we satisfied? Of course not. Too many of our friends and family are still out there looking for work,” he said.

Speaking at a school in Virginia on Friday, Obama urged Congress to look for ways to accelerate job growth saying, “My message to Congress is going to be, just saying ‘no’ to ideas that will create new jobs is not an option. There’s too much at stake for us not to all be rowing in the same direction.”

Playing to his strengths as a successful businessman, the Republican presidential challenger is focusing his campaign on the economy and what is perceived as Obama’s weakness in the general election contest. The job report was further evidence of Obama’s mismanagement of the economy, he said.

“This is way, way, way off from what should happen in a normal recovery,” Romney told Fox News, “We seem to be slowing down, not speeding up.”

The weak job creation data, combined with the record low rate of people actually employed, unsettled markets. On Wall Street, Friday saw the end of the worst week since the beginning of the year with a sharp sell-off on the day. The Standard and Poor’s 500 lost 2.4 percent, its worst weekly performance since December.

Anxious to keep the economic momentum over the last six months in focus, Alan Krueger, chairman of Obama’s Council of Economic Advisers, released a statement following the labor report saying the economy was continuing to heal and noting strong growth in the private sector over the last two years.

“Despite adverse shocks that have created headwinds for economic growth the economy has added private sector jobs for 26 straight months, for a total of 4.25 million payroll jobs over that period” he said.’

Krueger said the general trend was in the direction of positive economic growth and warned of reacting too strongly to individual reports.

“It is important not to read too much into any one monthly report and it is helpful to consider each report in the context of other data that are becoming available,” he said.

Economists suggested too that seasonal conditions could have played into the data.

“The unseasonably warm January and February boosted economic activity and meant some employers hired then, instead of waiting until the spring,” said Heidi Shierholz, economist with the Economic Policy Institute, in explaining why April job growth might not have been as strong as expected.

Others have warned over deeper concerns in the economy.

Sheldon Filger, author and founder, GlobalEconomicCrisis.com, says the April job data hints at a greater problem and that is U.S. monetary policy.

The fact that people had given up looking for work was a concern he said and reflects a structural problem, which could only get worse if not addressed. He believes too much focus has been placed on lifting the economy with loose monetary policy, rather than on how to create more jobs.

“Perhaps sooner than we can imagine, history will render its verdict on this policy of neglecting a recovery in the labor market in favor of reinflating the stock market,” he said on his blog.

Political analysts David Brooks and Mark Shields, speaking on PBS, note that the biggest election issue will be jobs but there are structural issues in the American economy that will make increasing job growth difficult.

“The productivity of the American economy is doing pretty well,” said Brooks. “Companies are doing a good job of producing stuff. They are just not using people to do it.”

Nobel Prize-winning economist, Paul R. Krugman, does not believe the unemployment rate is due to structural problems but credits slow job growth to “an inadequate level of demand.”

Speaking in Washington, D.C., May 2, Krugman said that now is the time for government to step in with infrastructure projects that would employ people and put money back into the market to increase spending.

In today’s political environment, however, that may not be so easy to do, he said.