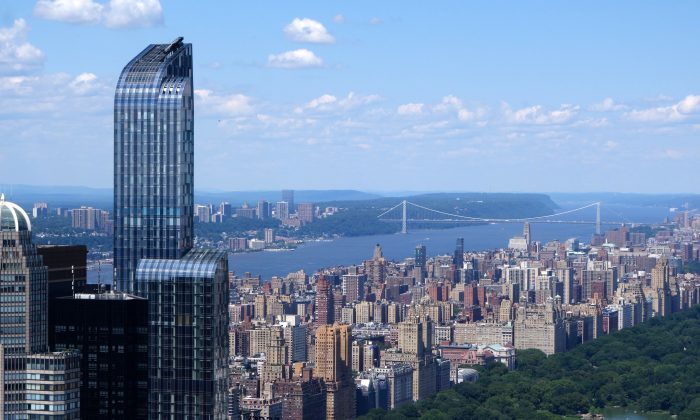 The skyline of New York with a few of Central Park and the Hudson River, in this file photo. Reggie Middleton thinks real estate in the U.S. is in another bubble. (William Edwards/AFP/Getty Images)
Business & Economy

Barclays, Pearson and Virgin Media have all announced significant job cuts as part of a growing pressure to cut costs, adding up to more than 6,000 job cuts in total. Firms are increasingly turning to cost-reduction strategies as a coping mechanism for competitive and difficult economic conditions. But while these strategies help to reduce costs in the short-term, these cuts can have much bigger, and fundamentally important implications for the identity of the firm and their long-term competitiveness.

Take education giant Pearson. The publishing company is to cut 4,000 jobs globally, or one in ten of its staff, as a result of the prolonged downturn, though largely across its US markets. Its chief executive, John Fallon, defended the decision by arguing that cost savings of £350m would be achieved by 2017 – something greatly needed within a firm with one of the highest administrative costs of any FTSE 100 company. Pressure from shareholders has trapped the firm in an economic cycle, which has proven difficult to get out of.

No doubt this kind of cost-reduction strategy stimulates a short-term solution and appeases shareholder demands – evidenced by share prices rising 15% on announcement of the news. But there’s evidence to show it actually creates longer-term issues for companies, continuing to trap them in a downward cycle.

Over the last decade, numerous studies have demonstrated the precedent that cutting costs by cutting people can have longer-term, damaging effects on company performance, in addition to the negative consequences for employees and their families. Indeed, despite warnings, major businesses still decide to use mass layoffs as an effective weapon to deal with difficult and competitive conditions.

In the heat of any competitive crisis, companies must focus on financial viability, but they must do this while considering their strategic needs. Short-term actions have longer-term consequences. As such it is possible to argue that quick headcount reductions come at a price. Notably, the price of missed opportunity.

Here Are 5 Tips for Job-Seekers Over 50

For example, Pearson have said that they want to focus more on new product development, but may have inadvertently reduced the long-term innovative and strategic capabilities of the firm. If you take away people within the firm who might have the power to influence business practice, you could negatively influence the firm’s long term capabilities. You want to be able to enable creative problem solving and thinking through individuals within the firm, not stifle innovation by creating a culture where employees are not fostered.

To drive long-term competitive advantage and innovation, there is a need to foster capabilities within a company. Ways of doing this could be through platforms to encourage greater employee interaction or through a better understanding of the personalities in your workforce.

For example, a study I recently conducted measured the personality profiles of 233 senior leaders from across finance and high-tech industries, and linked this to the way in which strategic capabilities were built within their firms. It showed that conscientiousness was strongly linked to a leader’s ability to sense opportunities within a company – something we know drives a better competitive position. So if you take away people that naturally look for opportunities and shift away from the status quo, you can also stifle innovation. Having already restructured once under its current chief executive – cutting 5,000 jobs in 2013 and 2014 – perhaps it is time Pearson tried a new strategy?

Strategic vision requires a commitment to people and fostering talent within a firm, which in turn helps develop the strength of company culture. While some firms may always be able to match another’s financial and physical resources, replicating the wealth of their employees and culture is rather more troublesome. Firms such as Pearson, Barclays and Virgin Media may therefore need to ask themselves whether workforce-related cuts are the best course of action.

Intelligent and effective cost cutting should not jump to mass layoffs. The answer to long-term advantage may lie in an understanding of people and viewing employees as the solution and not the problem when responding to a tough market.

Shelley Harrington is a lecturer in organization studies at the University of Huddersfield in the UK.