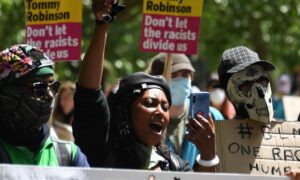 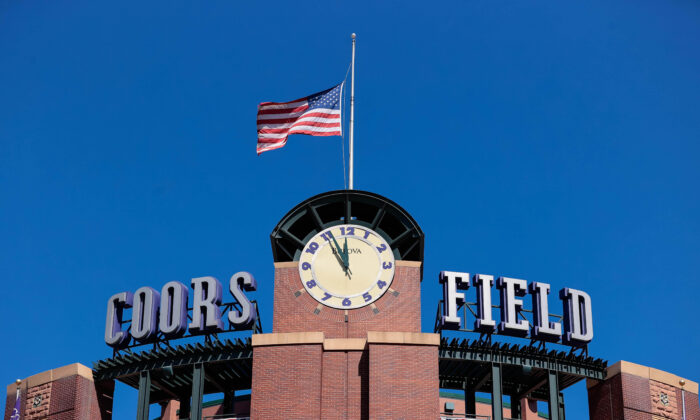 A general view of the clock tower at Coors Field before the Opening Day game between the Colorado Rockies and the Los Angeles Dodgers in Denver, Colo., on April 1, 2021. (Isaiah J. Downing/USA TODAY Sports)
Social Issues

On May 31, Job Creators Network (JCN) filed a lawsuit (pdf) against Major League Baseball (MLB) on behalf of Georgia business owners for its decision to move the All-Star game to Denver, Colorado. In a Tuesday press release, Job Creators Network (JCN) announced they have a court date set for June 10, 2021. In an exclusive interview with The Epoch Times, JCN Chief Executive Officer Alfredo Ortiz wondered about how such a large-scale event could be moved to another state in just four days in the first place.

According to its website, “Job Creators Network is a nonpartisan organization founded by entrepreneurs like The Home Depot co-founder Bernie Marcus who believe that many government policies are getting in the way of the economic freedom that helped make this country prosperous.”

On March 25, Georgia Gov. Brian Kemp signed Senate Bill 202 into law. The election integrity measure will tighten the use of mail-in-ballots, drop-boxes, and voter ID requirements. In retribution, MLB Commissioner Robert Manfred announced on April 2 it would be pulling the All-Star game from Atlanta. On April 4, Colorado Gov. Jared Polis released a statement saying he “will be burning up the phones the next few days to see if there is an opening to bring the All-Star game to Denver.” On April 5, a Denver news channel reported via unnamed sources that the game would be moved to Denver, Colorado. Just after 11 a.m. on April 6, MLB confirmed the game would be moved to Denver. By 11:30 a.m., Denver Mayor Michael Hancock and Colorado Gov. Jared Polis were holding a news conference to tout their All-Start game win.

According to Ortiz, the court agrees they have a case or they “wouldn’t have gotten a court date so quickly.”

“We actually just got a court hearing date within the last hour,” Ortiz told The Epoch Times on Wednesday. “So there’s a lot of scrambling and a lot of work that’s going to happen between now and June 10.”

While Ortiz looks forward to presenting his case, he made it clear he is not excited that he had to go to court over this. Ortiz explained that JCN has tried to make Manfred aware of the error of his ways through several other measures like putting up billboards, sending letters to his office, staging protests outside MLB headquarters, and publishing a full-page ad in The New York Times.

“He didn’t respond,” Ortiz said, adding that the lawsuit is just the natural progression of trying to stand up for Georgia’s business owners.

“That’s real money for real people,” Ortiz clarified, saying that businesses that have suffered great losses during the pandemic but managed to make it through to the other side deserve support, not condemnation.

“It might be a rounding error for large corporations like Delta, Coke, or Major League Baseball,” Ortiz noted of the estimated millions in revenue businesses were expecting. “But for these small business owners that were counting on and preparing the All-Star game for 21 months and then to have it ripped out … stolen from under them. We think it’s a true travesty.”

As Ortiz told The Epoch Times in May, Georgia business owners were afraid to speak out about the devastating impact of MLB’s decision in fear they would suffer a retribution Ortiz described as “an old-style Mafia shakedown.” On Tuesday, Ortiz said they are still afraid to talk to the press, or even to have faith that anyone cares about their story. But he is hopeful this lawsuit will give them the courage they need to believe someone is truly going to bat for them.

“When you think about it, it’s truly David and Goliath,” Ortiz said, reflecting on the awestruck question people have been asking him since the lawsuit was filed: “You’re taking on Major League Baseball?”

To those who believe he is fighting a losing battle, Ortiz reminds them that people who believe they are going to win “are not in the habit of filing frivolous lawsuits.”

“We believe the law is on our side,” Ortiz stated confidently, “and we believe MLB, and frankly others, contributed to the massive economic damage that was done to the businesses in the state of Georgia.”

“The relief we are seeking is moving the All-Star game back as quickly as they moved it out,” Ortiz stated, “which is in four days.”

Damages to Go to Georgia Businesses

“Look, I’m sure the citizens of Colorado are fantastic,” Ortiz conceded. “But I am disappointed in the governor of Colorado. He should have known better. Receiving that game was being handed the fruits from the poisoned tree.”

“He didn’t receive the game in the first place for a reason,” Ortiz insisted. “They didn’t ‘earn’ it. They didn’t ‘win’ it. They were literally given a gift they should have never received.”

“I saw him doing the interview and he was like the cat that ate the canary,” Ortiz recalled. “He should not have been all smiles. He should have said: ‘I don’t want my citizens to benefit at the expense of the citizens of Georgia.’”

“I have to emphasize, this is $100,000,000 of economic damages that local businesses in Georgia have suffered,” Ortiz reiterated. “It’s not a far-fetched estimate when you look at what other cities and local businesses have made when the All-Star game came to their hometown.”

In the meantime, Ortiz had one more thing for people to consider.

“I’m just going to plant this for you to think about,” Ortiz offered, referring to the uncanny speed with which MLB moved an event to Colorado that Georgia had been planning for nearly a year.

“MLB Commissioner Rob Manfred is ducking JCN’s lawsuit by refusing to be served,” Ortiz charged in a Tuesday press release, “a tacit admission that he dropped the ball by moving the MLB All-Star game from Atlanta.”

“While Manfred hides out in his $6 million Upper East Side penthouse, Atlanta small business owners continue to take his decision on the chin, losing out on over $100 million in economic activity when they need it most,” the press release asserted.

“It’s not surprising that someone who would cave to activist lies about Georgia’s voting law would also spinelessly hide from the consequences. Manfred is behind in the count with no balls and all strikes, but he can get out of this jam by doing right by small businesses and immediately moving the All-Star game back to Atlanta where it belongs. If he refuses, it’s only a matter of time before he gets served and strikes out looking.”