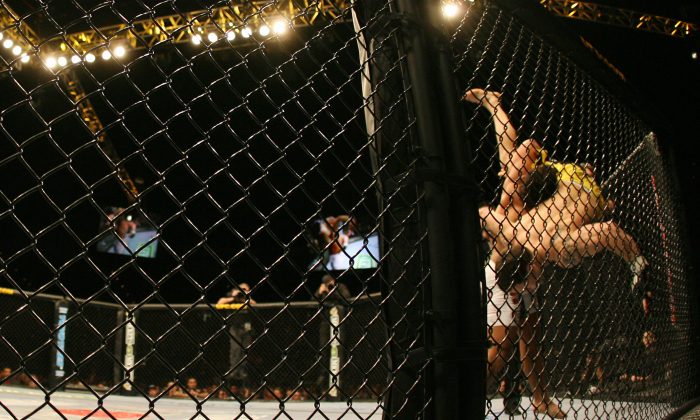 Franck 'The Answer' Edgar (R) fights with Tyson Griffin during UFC 67 at the Mandalay Bay Hotel in Las Vegas, Nevada on February 4, 2007. Started in 1993, the Ultimate Fighting Competition (UFC) is a combination of martial arts and boxing. (Gabriel Bouys/AFP/Getty Images)
International

Portugese MMA fighter João Carvalho, who fell ill after losing a fight to Charlie Ward (via a third-round TKO) at a Total Extreme Fighting event in Dublin, was taken to the hospital for emergency surgery and died Monday night. He was 28 years old.

“The Nobrega team this way comes to confirm the passing of your athlete João Carvalho, which occurred last night in the hospital Beaumont, in Dublin, for 21:35 hours. It is with great sorrow and sadness that we write these words, that the death of the athlete João Carvalho happened after 48 hours in critical condition.

“During the event-Tef MMA, which took place on Saturday, at the National Boxing Stadium in Dublin, where they were complied with all the safety rules, and after a fight where the arbitration followed all the correct procedures and regulars, the athlete john ‘Mutt’ Oak Did you feel bad, about 20 minutes after the end of the fight.

“Still on the site was immediately assisted by the medical team this, and then quickly transported to the hospital Beaumont, where she was subjected to a brain surgical intervention, after which the athlete remained in critical condition during the 48 hours following, eventually passed away on this Monday the 21:35 hours.

“Despite the continued monitoring doctor who was part of the organisation of the event and the hospital, the Irish who we appreciate all the support in these difficult times, and although they are known the risks of this sport, the passing of João Carvalho in my professional point of view was A great deal of misery, which makes it deeply saddened and dismayed, both your family, as the whole team nóbrega team, who always accompanied the João Carvalho throughout his career, in which he was highlighting the national and international level.

“It is with great regret that we offer our heartfelt condolences to the families and the whole team nobrega team. Vitor Nóbrega.”

According to a report on SBNation, this would be the fifth fatality in an MMA-sanctioned bout since the 2007 death of Sam Vasquez in Houston, Texas.