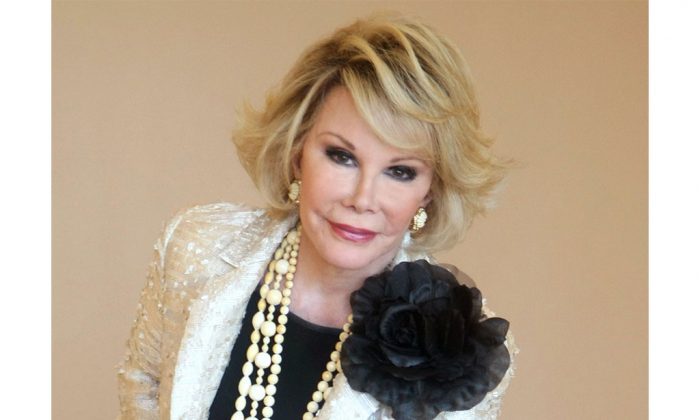 Joan Rivers in Cannes, southeastern France, on Oct. 5, 2009. According to Rivers’s 2014 will, the late comedian made her daughter Melissa Rivers her will’s executor with “the broadest and most absolute permissible direction.” (AP Photo/Lionel Cironneau)
New York

NEW YORK—Joan Rivers left her daughter, Melissa, in charge of her fortune and left money for some of her favorite charities, including Guide Dogs for the Blind, Jewish Guild Healthcare, and the Cystic Fibrosis Foundation.

According to Rivers’s 2014 will, which was filed in New York State Surrogate’s Court, the late comedian made Melissa Rivers her will’s executor with “the broadest and most absolute permissible direction” over a fortune that has been estimated as high as $150 million.

Other charities she singled out were the New York-based food pantry God’s Love We Deliver, the Simon Wiesenthal Center, and the Jewish Home and Hospital Foundation in Manhattan.

Rivers died Sept. 4 at 81 of brain damage due to lack of oxygen. She’d stopped breathing during an endoscopy days earlier.

The late comedian asked that her business manager Michael D. Karlin and interior designer Robert Higdon be named co-executors of the living trust.

Specifics of her assets and how they will be divided haven’t been disclosed.

Bequests were made to her assistants, Sabrina Lott and Jocelyn Pickett, her friend Scott Currie, and Rivers’s niece and nephew, Caroline Waxler and Andrew Waxler.