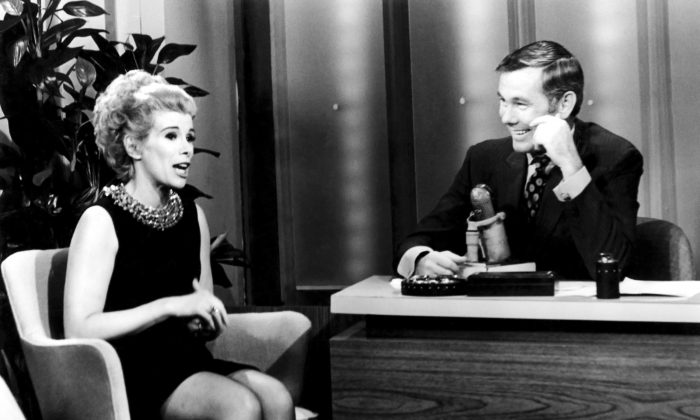 Joan Rivers Was Many Things—Which Will We Remember Her As? (+Videos)

Joan Alexandra Molinksy was born in Brooklyn on June 8, 1933, to immigrants from Russia. She attended the Adelphi academy in Brooklyn, and, an excellent student, was Phi Beta Kappa at Barnard College, from which she graduated with a degree in English in 1954. She wanted to be a dramatic actress. She grew up to be Joan Rivers – who died yesterday at the age of 81.

The acerbic, rasping performer was one of the hardest-working people in show business. Her resume includes 12 books, film-writing (Rabbit Test, 1978), many appearances on talk shows, her own late-night talk show, two comedy albums, being the subject of an acclaimed documentary (Joan Rivers: A Piece of Work, 2010), winning a season of The Celebrity Apprentice, her own reality show with her daughter, Melissa (Joan Knows Best), countless stand-up performances, and most recently, co-hosting Fashion Police.

A Piece of Work trailer

With such a long and full career, for what will Rivers be remembered?

Her nothing-off-limits jokes and her surgically-modified face are what circulate most in the media and probably most people’s minds, but Rivers has an influence and a legacy that must be recognised.

She began her career in a different mode to what she’d later adopt. She performed in a folk comedy trio, “Jim, Jake & Joan,” in the early 1950s and as a stand-up in Greenwich Village coffeehouses and nightclubs in the early 1960s.

Changing her surname to Rivers, she began to work in the field of female self-deprecation. This made her safe by turning her cutting sharpness against herself. Phyllis Diller, with her garish make-up and fright wig had made this a familiar manoeuvre.

But Rivers used herself as a board off which to slate a world tipped against women. An early routine on The Ed Sullivan Show (see below) had her railing against the difficulty of finding a man, and, much in the vein of the first HBO “prestige TV” show, Sex and the City, questioning why this was even something by which a woman should be judged.

Appearances on The Tonight Show with Johnny Carson led to mainstream success and fame. She was for a time the highest earning performer in Las Vegas and the permanent guest host for Carson’s very frequent vacations from The Tonight Show. She was offered US$10 million in 1987 to host her own late-night show on the Fox Network. After initial success, she flopped in the ratings, her show was cancelled, and her life reached its lowest points.

After she was fired, her husband Edgar Rosenberg committed suicide. She couldn’t get a gig on TV because the networks thought she was disloyal to Carson (he had said as much).

She worked her way through it. This meant making cracks at her life and the world. Of her life:

After Edgar killed himself, I went out to dinner with Melissa. I looked at the menu and said, “If Daddy were here to see these prices, he’d kill himself all over again.”

And the world was becoming increasingly saturated with celebrity. A 24-hour news cycle was hungry for content. OJ Simpson was on the horizon. The now-ubiquitous commentary about commentary was beginning to fill an increasingly wider (and shallower) mediascape. Rivers was there for the birth of snark.

Snark works effectively and somewhat harmlessly against celebrity. But the rest of the world wasn’t replaced by the world of celebrity. It still broke through in tragic spectacle.

Hence, her remarks about 9/11 (“Meet me for lunch at Windows on the Ground”), about the Holocaust (“The last time a German looked this hot [of Heidi Klum] “was when they were pushing Jews into the ovens”) and most recently, about Palestinians deserving to die because they had waged war (she later said she meant Hamas and not Palestine) are very difficult to reconcile.

This is an uneasy bridging of the different worlds – real and celebrity – that occupy the same mediascape. Commenting on her attacks on female celebrities, Leandra Medine argues that Rivers “hadn’t just been tearing women down, but boosting their social immune systems”.

But what of the systems of those that were already weakened: 9/11 victims, Holocaust survivors, Palestinians?

Death undergirds much of Rivers’ work. It was difficult to tell when she lowered her mask. In one sense, it could never slip because she had a plastic face. How could you tell when she was out of character, when she wasn’t performing? Rivers looked the same and worked the same line against whatever she came across.

This work, however, even if it didn’t always work, has paved a path for women in late-night television (The Mo’Nique Show, Chelsea Lately) and in comedy (Sarah Silverman, Amy Schumer, and, less obviously, Tina Fey). She has also spoken loudly for different kinds of women that are not visible: widows, ageing women, angry women.

In one of her last appearances, Rivers was a guest on The Tonight Show, going back to where her star was born. The affable Jimmy Fallon sits at the desk now, instead of the affable Johnny Carson. Not much has changed there.

She also revealed that she didn’t fear death: her father was a doctor, “and I was around death all my life … because he was a fucking crap doctor.” She laughed in Death’s face, even though Death might struggle to tell if she was laughing.

This would make her laugh.

Rodney Taveira is a lecturer in American Studies at the University of Sydney. This article was originally published on The Conversation. Read the original article.