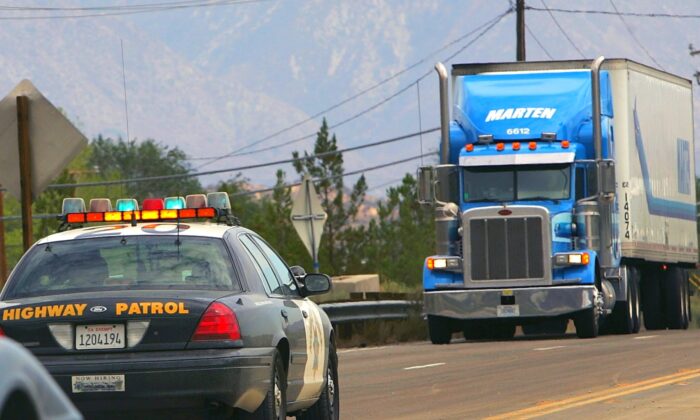 An Illinois trucking company is halting all pickups or deliveries in cities that are calling to defund or disband police departments, the co-owner of the company said during an Aug. 5 interview.

Mike Kucharski, who co-owns Chicago-based JKC Trucking, said he wants to keep his drivers safe, even though it might affect the company’s revenue “tremendously.”

The No. 1 priority “is to support our drivers and their safety when they are on the road,” Kucharski said during an appearance on “Fox & Friends.”

“Defunding the police is a bad idea because when you’re on the road for weeks or days at a time driving 11 hours with valuable cargo, everybody wants to steal this,” he said. “When you’re a truck driver long enough on the road, there’s no safe place; violence is everywhere.”

Truck driving has been ranked by the U.S. Bureau of Labor Statistics as one of the most dangerous jobs in the United States. In 2018, the agency reported it as the most deadly job. Records show a total of 5,250 fatal work injuries nationwide in 2018, up 2 percent from 5,147 in 2017.

“If you’re gonna be having valuable cargo and there is going to be no police to rely on, who’s going to protect our drivers?” Kucharski asked.

In a survey conducted by CDLLife this year in mid-June, 79 percent of truckers said they will refuse to deliver to cities that had defunded their police departments. Many truck drivers expressed their concerns via messages to the poll, with one trucker writing, “no cops, no trucks.”

“Why would I wanna risk my life even more than I already do … the cops are out to protect us and everyone else’s bad enough, drivers are already being shot at as it is,” the driver wrote. “Take away the cops and I could die and if I have my kid or family member with me when I’m there they could die. Not risking my life for these [expletive], let the shelves go empty in these defunded areas.”

Trucking expert Dan Doran, who has been working in the transportation service for more than 40 years and was the chairman of the Truckload Carriers Association (TCA) in 2018, told Transportation Nation Network (TNN) in mid-June that companies in certain areas that want to receive their load safely will likely be forced to “beef up security.”

“A good customer may tell a good carrier that they’ll provide them some security to get them into the city limits … some kind of an escort,” Doran said. “I think any reputable carrier is going to listen to that concern and take steps to help the driver become more comfortable going in there.”

“Truckers were already getting nervous about all these protests before they even started talking about defunding the police,” he added.

“Another issue that I am seeing in the future is I have cargo insurance, liability insurance, fiscal damage insurance, and I am very curious how when I renew my contracts at the end of the year, if there is going to be language—if I am going to even have coverage going into these places,” Kucharski told Fox.

“Right now, I have coverage going all over domestically,” he said. “You have to get special coverage for Canada or Mexico or you might have to buy special riders for this on top of everything.”

Darren Yancy, a commercial insurance consultant, told TNN in June the defunding of police could increase potential risks from crime, such as theft and fires, and transportation companies could consider increasing insurance costs.

Yancy added that the possible dangers to both the load and truckers, and the associated increase in costs, will force companies to choose whether or not to deliver to those areas.

Kucharski said that “defunding the police is not the solution.”

“I welcome the politicians to sit down with us so we can educate them [on] what is best for the economy and small businesses. Last time I checked, small businesses were the backbone of America.”

Many truckers have been fearful of their safety and what might happen if there are no police departments in cities. Truckers have been on the front lines for the past few months, during both the CCP (Chinese Communist Party) virus pandemic and the protests over police brutality.

Trucking companies and experts have been expressing their concerns following the “defund the police” movement in the wake of the police custody death of George Floyd that has since sparked nationwide protests.

The latest move to defund the police was by the Seattle City Council, which on Aug. 5 agreed to cut millions in funding to the Seattle Police Department but rejected proposals that would have slashed $75 million from the department’s budget.

Trucking industry stakeholders told TNN they will be following developments and see how far these policies will go.