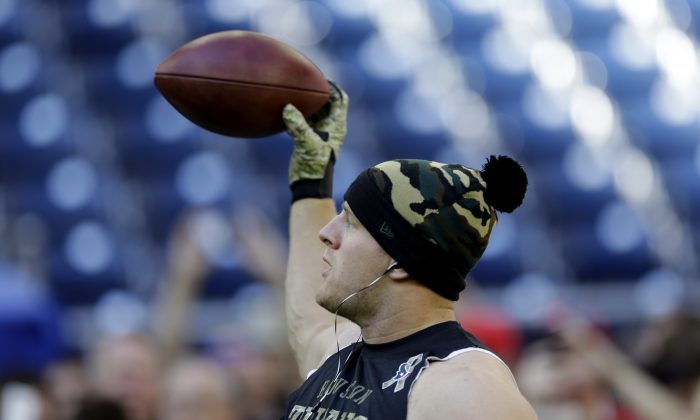 JJ Watt, the Houston Texans star defensive end, was not “caught with coke,” meaning cocaine, or drugs. In this Nov. 23, 2014, photo Houston Texans' J.J. Watt practices making one-handed catches before an NFL football game against the Cincinnati Bengals in Houston. The one-handed catch by New York Giants' Odell Beckham Jr. that became the most talked-about play from Sunday, Nov. 23, 2014, did more than just boost his standing with the New York Giants, it paid off a routine growing popular among many skill players of practicing the impractical, one-handed circus grab.(AP Photo/David J. Phillip, File)
Life & Tradition

A report published on a fake news site The Daily Leak saying otherwise, however.

The Daily Leak has a disclaimer, saying: “The Daily Leak is a satirical website. The contents of the DailyLeak.org may not be reprinted or re-transmitted in whole or in part without the express written consent of the publisher. The Daily Leak is not intended for readers under 18 years of age.”

“The Daily Leak uses invented names in all its stories, except in cases where public figures are being satirized. Any other use of real names is accidental and coincidental.”

This means that the story about Watt, who likely will be voted NFL defensive player of the year, is fake.

The bogus story only has a photo and no text, but it was shared more than 15,000 times on Facebook.

“Damn JJ Watt got caught with drugs too!!!?” one person asked.

Asked another: “Did jj watt really get caught with drugs?”

Wrote another, “JJ Watt gets caught with drugs and now he’s trying to buy off the cops with pizza.”

“There goes your season!!! This makes me sad! I really like Watt as a player,” wrote another.